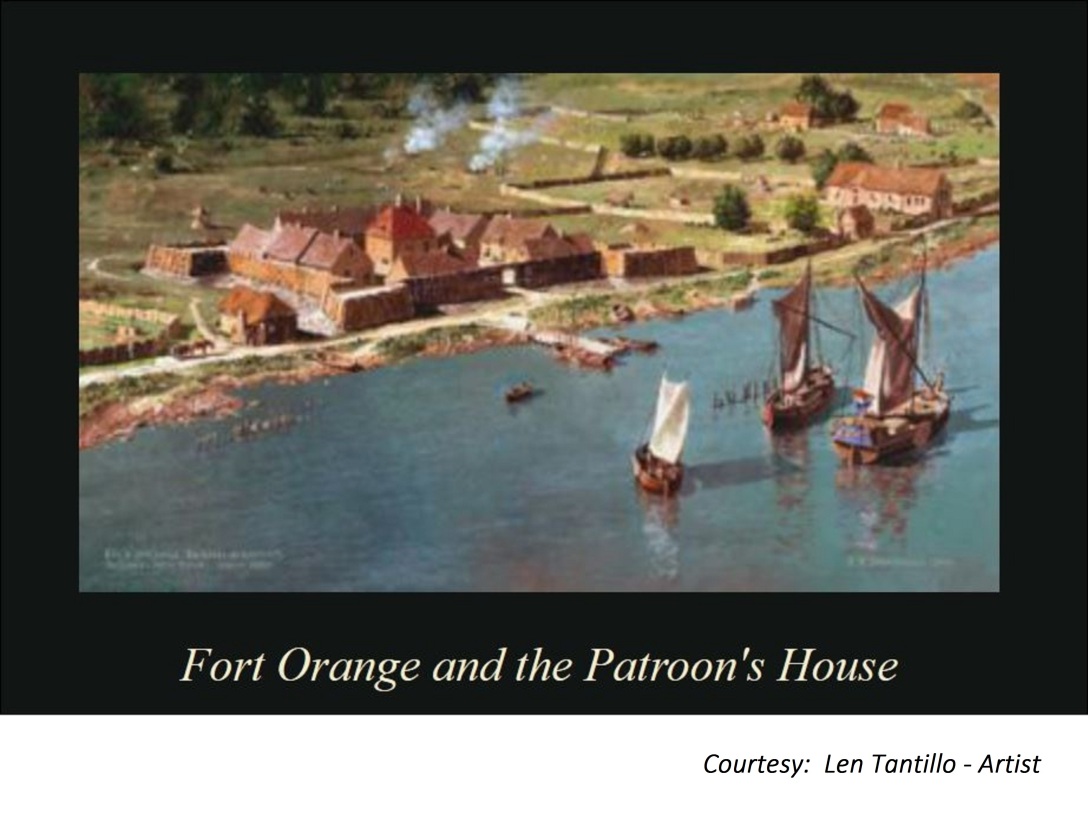 Most of you know that the “Patroon” originally owned the vast area around Albany called Rensselaerwyck. (Basically, Patroon means “land owner” in Dutch.) The first Patroon was Killian Van Rensselaer, a pearl and diamond merchant, who acquired the land from the Dutch West India Co. (DWIC) in 1630. Think of the DWIC as a group of venture capitalists and speculators.. betting on the New World, using a traditional form of Dutch land ownership for revenue generation and capital formation.

Rensselaerwyck was one of several patroonships in the New Netherlands, but the only one that proved successful*. The original grant that encompassed land on both sides of the River was soon expanded by acquisition of additional lands from the Indians. In exchange for the land the Patroon had to establish a functioning colony (over which he had almost total power). (Much like IDA grants today, the Patroon got a tax break for the first decade.) Rensselaerwyck was a feudal manor and the Patroon was literally Lord of the Manor, except for Albany, which was at the time Fort Orange, a wholly owned subsidiary of the DWIC. 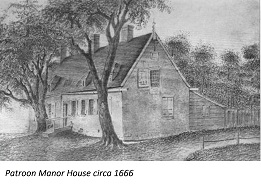 There’s no evidence that the first Patroon ever visited his fiefdom. Business was conducted in his name by agents, from a large house and cluster of buildings north of the Fort on Broadway, near the Patroon Creek, a tributary of the Hudson River. In 1666 the compound was destroyed by a flood and rebuilt by Jeremias Van Rensselaer. (Jeremias was the third son of Killian and the first Patroon to establish permanent residence in Rensselaerwyck.) 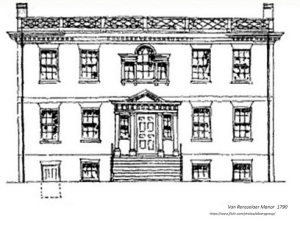 According to Steve Belinski (the “Colonial Albany Social History Project”) the new building was constructed in the “Country Style” with the entrance on the long side and attached outbuildings. (Think a Patroon “compound” and the seat of government for the Manor.) A century later in 1765 a new and grand Manor House would be built on the same grounds by Stephen Van Rensselaer II, the Patroon and 3rd Lord of the Manor for his new wife, Catherine Livingston, daughter of Philip Livingston (signer of the Declaration of Independence). It was a large Georgian Mansion – one of the grandest homes in the country at the time – nestled amid a forest setting and lush, well-tended gardens. It was a thriving, mostly self-sufficient plantation, including slaves. 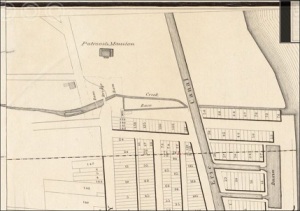 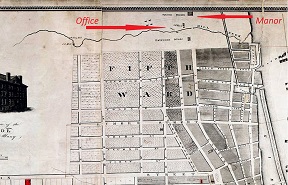 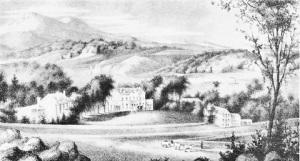 There were changes made to this Manor House around 1820 and again in the early 1840’s the existing structure underwent major renovation by architect Richard Upjohn (he designed the existing St. Peter’s Church on State St.), preserving the Georgian features of the original Manor House. It was still a gracious baronial manse – but it would be the home of the Last Patroon, Stephen Van Rensselaer IV. 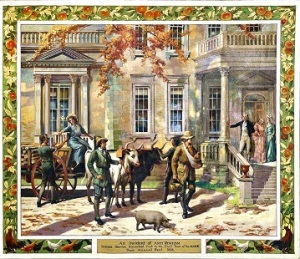 The days of the Patroon were coming to an end. The Anti-Rent Wars had already started in the late 1830s. The Patroon’s thousands of tenants were protesting what was still a feudal system of land ownership in which the Patroon held all the cards. The Wars would continue until 1846** when the NYS Constitution was amended to abolish the Patroon system and Van Rensselaer would start selling off his property – in Albany and across the Manor. *** 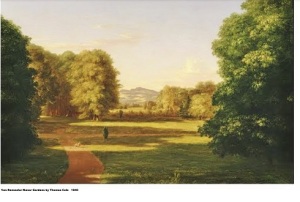 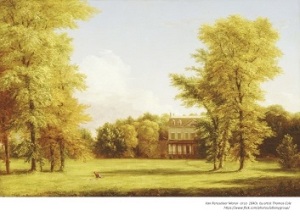 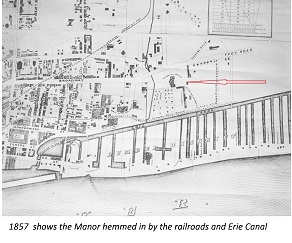 The Last Patroon died in 1868. By then the Manor House was hemmed in by the Erie Canal and the railroads on the east and the growing city and its factories on the west. By the 1870s the great Manor House was abandoned. There were attempts by the family to have the structure declared a New York State landmark of sorts. There were efforts made by some citizens to move the building to Washington Park. These failed. 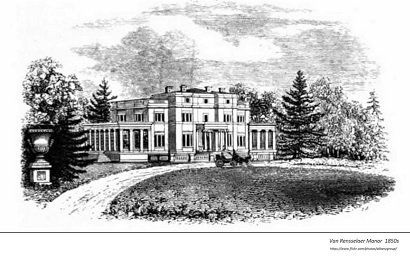 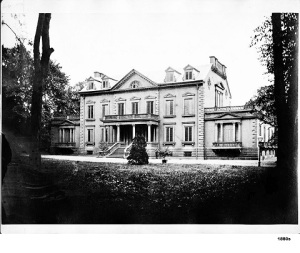 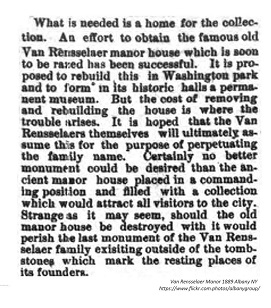 Finally, in the early 1890s Albany’s great architect, Marcus Reynolds (Banker’s Trust, the D&H Building and the Delaware Ave. fire house) and young Van Rensselaer cousin, convinced the family to agree to have the Manor disassembled. He transported the exteriors and the Manor House was “re-built” as the Sigma Phi fraternity house (Van Rensselaer Hall) at Williams College. (Reynolds was an 1890 graduate of Williams.) The interiors were donated to the Metropolitan Museum of Art in New York City and are currently on display in Gallery 752 in the American Wing. 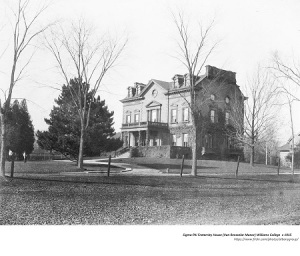 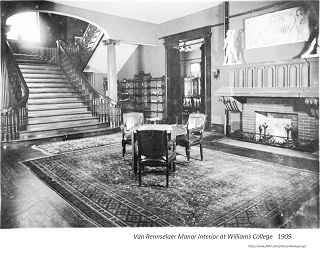 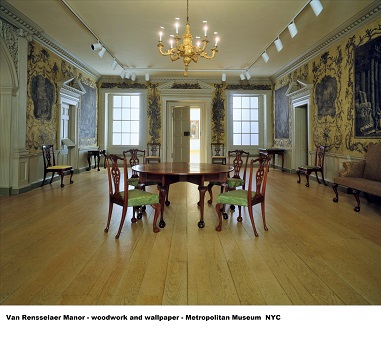 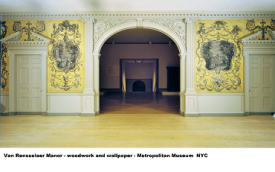 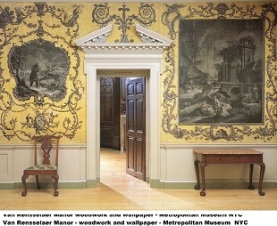 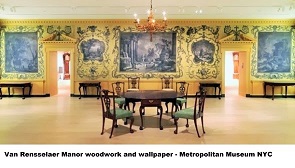 Van Rensselaer Hall survived until 1973 when it was demolished for a new Williams College library.

The last evidence of the Patroons in Albany survived into the 20th century on Broadway near Tivoli St. Alas, circa 1918 the Patroon’s Office (where the Patroon’s agents conducted business for almost 200 years) was demolished to accommodate the expansion of the International Harvester franchise. 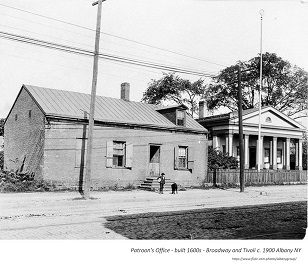 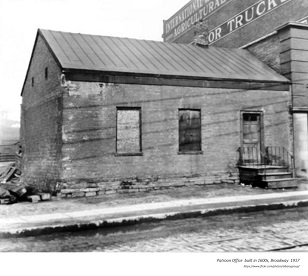 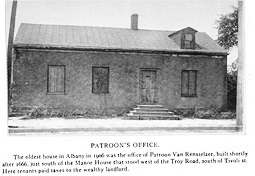 Today there’s no trace the Patroons were ever here, except for an historical marker on Clinton Ave. that identifies it as the former Patroon St., the original dividing line between the Patroon’s land and Albany. There’s no historic marker … nothing, nada, zip, zilch ….at 950 Broadway, near Manor St., the address of the Manor House. (This was one of the pet peeves of the late Warren Roberts, History Prof. at U Albany and author of the great book, “A Place in History; Albany in the Age of Revolution 1775-1825”. ) 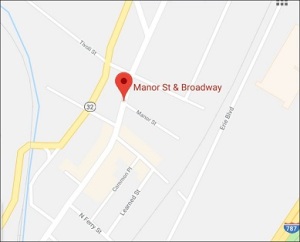 And that’s how the Van Rensselaer Manor House vanished.

* A 10th G Grandfather, Cornelius Melyn, was the Patroon of Staten Island. It didn’t work out. There were wars with several Indian tribes, and battles with the DWIC and the successive Director Generals of the colony, including Peter Stuyvesant, over the dictatorial nature of the DWIC. He was a cranky rebel and a thorn in the side. Great Grandpa Corny ended up in the English New Haven Colony, took an oath of loyalty to the Crown and relinquished his right to the Patroonship of Staten Island. The last vestige of Corny is a mural in the Staten Island Borough Hall.

**The Anti-Rent Wars are fictionalized in the novel, “Dragonwyck” by Anya Seton (1944) and in a movie of the same name (1946) with Gene Tierney, Vincent Price and Walter Huston. Vincent Price is the perfect arrogant Dutch Patroon villain.. “You must pay the rent.” 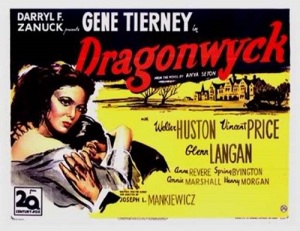 *** A GG grandfather purchased land in the 200 block of Livingston Ave. (then Lumber St.) in 1850 as part of the Patroon’s property sell-off.