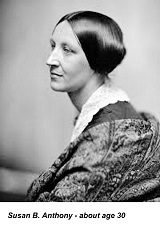 While Anthony is closely associated with the city of Rochester, she spent considerable time in Albany with her BFF, Lydia Mott. It was in Albany she had her epiphany and began devoting her life to women’s rights and suffrage.

Susan was from Adams, Mass. She was 17 when she met Lydia Mott, a young Quaker woman from Albany,  teaching at Molson’s Female Seminary, a Quaker boarding school outside Philadelphia. There was a family linkage-Daniel Anthony, father of SBA, had attended a Quaker school, Nine Partners (Millbrook, Dutchess County), where he had had been taught by James Mott (Lydia’s cousin) and Lucretia Mott, wife of James. Susan and Lydia (and Lydia’s sister Abigail) would became friends for life. However. Susan’s father was in the midst of dreadful financial troubles, and she was forced to leave school

By the late 1830s Lydia was already involved in women’s rights, working to get the married women’s property act passed in New York State (that would happen in the late 1840s), and running a men’s haberdashery store on Broadway near Franklin St. to support herself and two sisters. In 1839 Susan worked for 4 months as a teacher in New Rochelle, a job she found entirely unfulfilling and could not countenance the disparity in wages between male and female teachers,. For the next 6 years she taught in Washington County where the family was now living, feeling increasingly constrained and yearning for something she couldn’t quite identify.

By the early 1840s both Lydia and Anthony were becoming involved anti-slavery activities in their own ways. None of their correspondence survives, but we can only imagine how the pen flew across the pages. Lydia and her sister Abigail had already made the acquaintance of Frederick Douglass (Susan later wrote that Abigail taught Douglass how to read.) Meanwhile Susan was toiling away.

In 1845 Susan’s father (using part of his wife’s inheritance) bought a farm in Rochester NY. Things were looking up. In 1846 Susan was invited to teach in Canajoharie. She makes a success of it and the job pays well (For the first and probably the last time she spends some of her money on clothing and finery.. a fancy hat, a shawl, a fur muff, jewelry – hard to imagine when we look at photos of her in later years.) While in Canajoharie she spends much time in Albany with Lydia and Abigail. Anthony’s biographer (Ida Harper) says:

“Their modest home was the rallying center for the reformers of the day and it was here Miss Anthony met many of the noted men and women with whom she was to become so closely associated in the future.”

The Mott homes, first on Maiden Lane and then on Columbia St.,would serve that purpose for the next 3 decades. There wasn’t social activist who did not visit the Motts when they were in Albany They’re the people we have come to think of as the men and women who changed America – William Lloyd Garrison, Lucretia Mott, Elizabeth Cady Stanton, Wendell Philips, Gerrit Smith.

While she was in Canajoharie Susan became more deeply involved in the temperance movement – and it was there in 1849 she gives her first speech.

After 2 years she returns to Rochester; the beloved cousin with whom she had been living in Canajoharie dies in childbirth. Susan’s grief is boundless.

By 1850 Susan abandons teaching and throws herself into the temperance cause. While she supported equal rights for women, her biographer says she was still not convinced about the need for women to vote. In 1850 the beautiful Abigail Mott died while she and Lydia were in Battle Creek Michigan visiting family. Susan raced to be at Lydia’s side in Albany.

Susan reached the turning point of her life in Albany in 1852. It was the stuff of high drama. She was appointed a delegate to the NYS Sons of Temperance convention in Albany that year, held at the State Street Baptist Church.

Susan rose to speak and the chairman told her, “sisters were not invited to speak, but to listen and learn”. She and a handful of other women walked out. They went to Lydia‘s house at 37 Maiden Lane (Sandwiches To Go is there today). She told them they should hold their own meeting. It sounded like wise counsel. Lydia found them a venue for the meeting, the First Presbyterian Church on the corner of Philip St, and Hudson Ave., and took them to see Thurlow Weed, the publisher of the “Albany Evening Journal”. He approved heartily of the meeting and promised to advertise the heck out of it in the paper. 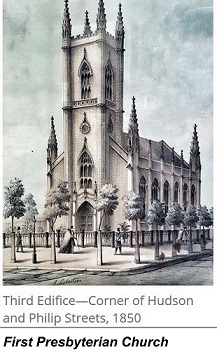 The meeting was a resounding success. Elizabeth Cady Stanton sent a letter that was so radical only Susan had the courage to read. Several months later Anthony convened a women’s temperance convention in Rochester; it was another success. The same year there was anti-slavery convention in Rochester; Lydia attended with Susan. It was here that her biographer says she gained the courage to become an active abolitionist as others were (Lydia had been a member of the Underground Railroad in Albany for years). In September Anthony attended her first women’s rights convention in Syracuse. The cause of women’s rights, including securing women the right to vote, became her life.

Susan and Lydia worked tirelessly separately and together for the next 20 years. In 1854 Albany was the site of a Woman’s Right Convention. Lydia did the organizing and Susan did the speaking. In 1860 Susan helped Lydia establish the American Anti-Slavery Depository stocked with pamphlets, literature and books on Steuben St. In 1861 when National Women’s Rights Convention was held in Albany, Lydia worked tirelessly behind the scene, doing much of the administrative/logistical work, while Susan, who had now become a powerful speaker, took to the stage. They were a team. After the end of the Civil War Mott and Anthony stood steadfastly side by side as they made it clear to other members of the Anti-Slavery Society that abolition of slavery was insufficient and there had to be a constitutional amendment granting African Americans the right vote.

They were there for each other at the great moments of their lives. In 1867 Susan made an impassioned speech to the NYS Constitutional Convention at the old State Capitol, imploring the right to vote “irrespective of race, color or sex”. In 1872 Susan was arrested for voting in a federal election in Rochester. She was indicted in federal court in Albany’s old city hall (same location on Eagle St. as it is today) by a panel of male jurors from Albany. Lydia now owned a boarding house at 87 Columbia St., just a stone’s throw from the Capitol and City Hall. She provided a place of comfort and ease – a retreat for Susan (and their friends) as they fought the great political battles of the 19th century. 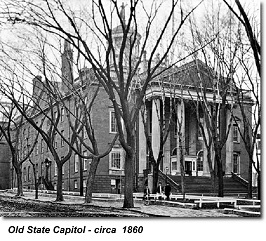 In 1875 when Lydia lay dying from tuberculosis Susan went to her side  on Columbia St. and nursed her for weeks. When Lydia died Susan wrote: “There passed out of my life today, the one, next to my own family, who has been the nearest and dearest friend to me for thirty years.”

Lydia is buried in Lot 3, Section 49 of the Albany Rural Cemetery.

(We like telling this story, not only because it’s about Albany, but it let’s us talk about a young and lovely Susan B. Anthony, so different from the photos when she was older, and how she came to her calling. We love origin stories. And it allows us to tell the story of Lydia Mott, the forgotten hero of the 19th century suffrage movement.)