The first issue of Albany’s first newspaper, the “Albany Gazette”, was published yesterday, November 25 in 1771. It was also the first newspaper published in New York State outside of New York City. The publishers were 2 Scotsmen, the Robertson brothers. There is some disagreement regarding their shop location; either Court St. (tiny chunk of what is now Broadway, south of State, near Beaver and Hudson) or Chapel near Pine St. We’re not sure how long the paper lasted, but the Robertson brothers were Loyalists and fled Albany in 1776 for Canada; the paper ceased publication at least 2 years before they left.

In 1782 Charles Webster and Solomon Balantine started the “Northern Gazetteer or Northern Intelligencer”; but there was trouble in paradise. A year later Webster dissolved the partnership and left for New York City. When Balantine left Albany, Webster returned to Albany, and in 1784 he started printing the “Albany Gazette” again. Shortly thereafter, his brother George joined him in the business.

(NOTE: Joel Munsell, printer and historian of Albany in the mid-1800s, reports that it was once suggested to the Websters that they print the Gazette in Dutch, in whole or in part, given the number of people in Albany and surrounding areas who did not speak or read English.)

The Great Fire of 1793 destroyed he Webster Brothers print shop on Middle Lane (a short alley connecting State St. to Maiden Lane; now James St.). In 1794 a new, much larger shop was erected at the corner of State and Pearl and came to be known as the “White House”. That corner is the famous “Old Elm Tree Corner”, after a tree planted by Philip Livingston in the 1730s. That tree stood for about 150 years, until being cut down in the late 1800s.

PS. Look carefully enough and you will an old plaque embedded in the wall of the bank that stands on the Old Elm Tree Corner commemorating Philip Livingston and the Tree, but sadly nothing about the “Albany Gazette”. 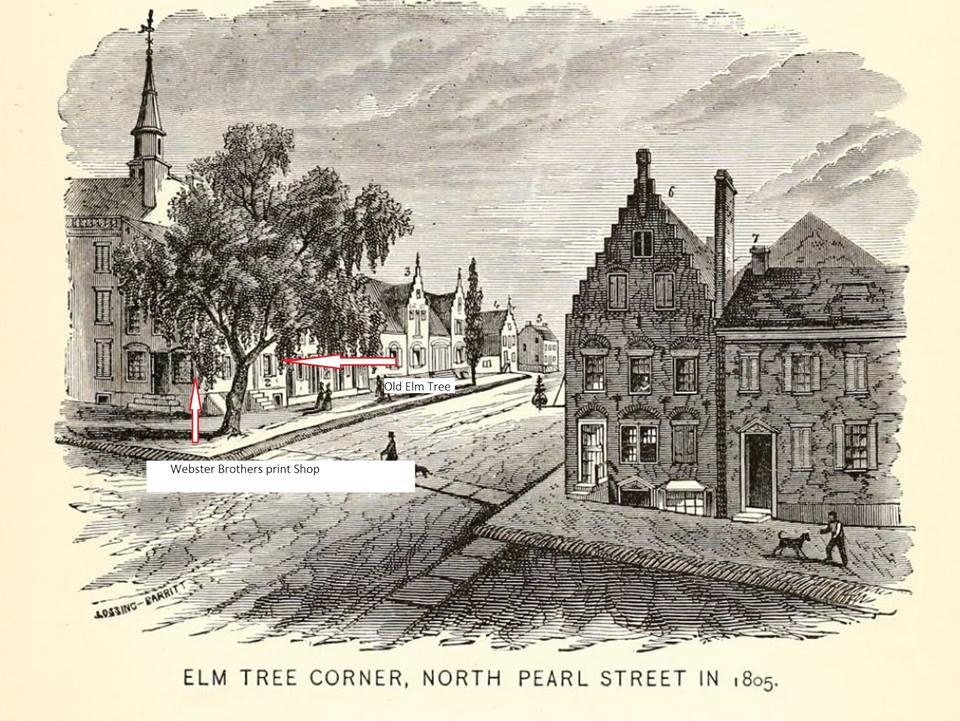