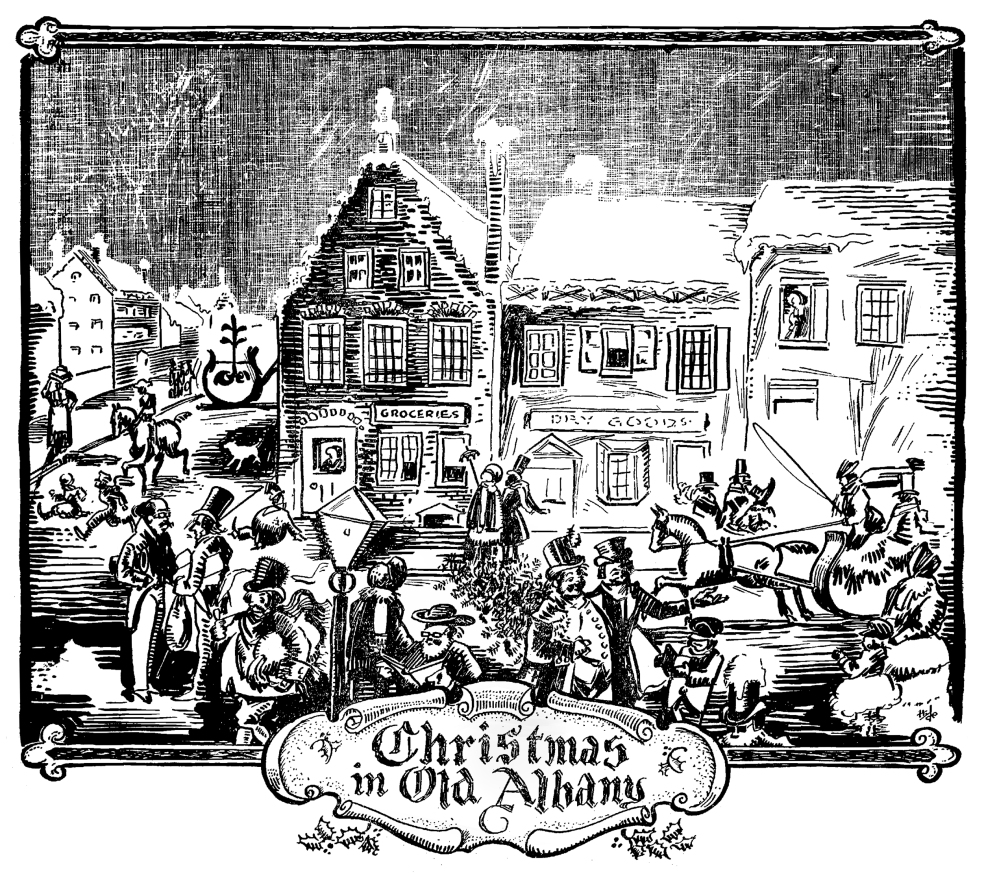 This is the text of an article which appeared in the Albany Evening News, Friday, December 10, 1926.

Mistress Angelica opened one eye. Undeniably it was morning, for she could make out quite clearly the design of the frost on the windowpanes. It looked like a rabbit, with funny pointed ears stretching up ever so high, almost in the very top pane. Tentatively she sniffed the air, half expecting the familiar spiced odor of a rabbit which has hung on the great spit in the oven. Tentatively she wiggled one toe from beneath the gay quilt and counter pane and tested the atmosphere of the room.

Not at all tentatively she withdrew the toe, entirely satisfied by her experiment that it was a very, very cold day indeed, cold even for the Albany countryside, where cold winters were to be expected. She decided to close the half open eye and wait for something to happen; perhaps wait until summer before getting up.

But, try as she might, she could sleep no more. The truant eye simply would not stay shut, but was forever taking sly peeps about the olive and yellow walls. It rested on a sketch lying on her young friend, Philip Hooker whom the good burghers of Albany said was a youth of promise. Philip had said the drawing was of a house for a bank which had impressed Mistress Angelica mightily, for she had never seen a house before it became a house, if you know what she meant.

Around the walls swept the irrepressible eye, half awake in spite of everything, although the other eye was firmly shut. It reached the door way, peered out into the dark hall, glanced up at the sprig of mistletoe –

With a sudden decision both eyes opened at once. The mistletoe, of course. How could she have forgotten? Last night she had hung it because it was the night for hanging mistletoe, and so, of course, today must be —

Christmas! Christmas of the year 1826 in the ancient city of Albany!

Before she had time to think she was at the window and was slaughtering the frost rabbit with quick pushes of her fingers. Now she could see the barnyard and just make out the turkeys and chickens in their coops. She wondered if the had all faced to the east at midnight as animals are supposed to do at midnight of Christmas eve. Or was there perhaps one wicked old turkey who didn’t believe in such things and who resolutely looked the other way.

With a little frown she put such a shocking thought out of her mind. Cousin Van Rensselaer would be horrified and Aunt Huybertie would look pained.

At any rate she was sure that when she went downstairs she would find the kitchen had been swept by the fairies and that there would be three more faggots on the hearth, one for each of the family, a special gift of the Christmas spirits.

She dressed quickly and went out. She would breakfast with Cousin Harriet, but first she would go into the town. Thrilled by the prospect, Mistress Angelica tripped lightly through the snow into Albany.

The town was awake and busy. There were still several hours before the good Dutch folk would be going to church and they all seemed to have had the same idea as Mistress Angelica. It almost looked as if every one of the 15,000 souls who inhabited Albany had joined the Christmas parade.

The throng of apprentices stalking around with their segars and their walking sticks, lords of the day, far above work and ripe for sport.

The little darkies strutted about showing rows of ivory and the yaller of their eyes, tokens of joy for the return of the annual jubilee.

Now and then through the crowds cluttered sulky, gig or tandem with the dandies sitting in style, in true Tom and Jerry fashion. What gay and rushing life to see in this slow Dutch town, thought Mistress Angelica as she returned a charming curtsey for a most majestic bow from a passing sulky. For sure, New York could furnish nothing better on this Christmas day.

In the odd corners of the streets where there were no paraders, hung all the good things in Albany’s calendar of eatables. Fat turkeys, pigs, geese, ducks, chickens, partridges and rabbits were as plenty as blackberries. The housewifely streak in Mistress Angelica responded in the abundance of delicacies. She thought of Christmas dinner.

This would come after church, which was the most formal event of the day. Not a Dutchman in Albany would miss church on Christmas, any more than he would have missed his St. Nicholas eve dinner three weeks before. The solid citizenry of Albany would be there en masse, in their most gorgeous clothes, suitable for the festive nature of the service.

For in all truth it was a festive service. The bare walls of the church were fairly hidden by garlands of evergreen, put up on Christmas eve by the devout. Mistress Angelica herself had helped with the decoration and had thought it great fun, although some had talked of the dissenters.

Not every one in Albany approved of this gay practice in the churches. There were those of strict Calvinistic persuasion who thought such designs smacked not a little of the “old one,” and who agreed with the anonymous person who called himself “Observator.” This earnest fellow had written to a newspaper in Schenectady, the”Cabinet,” only two weeks before and had called this evergreen hanging a “futile and improper practice.”

This has been recalled as Mistress Angelica helped put up the branches on which the snow was just melting, but she had answered by telling of what she had read in Albany’s newspaper, the “Microscope.” Just ten days before Christmas, the Microscope had probed into this business of Christmas customs and especially into the Puritan objections to church decoration.

“We have ever looked upon this custom as one of the most beautiful among all the ceremonies attached to the Christian worship,” declared the editor of the “Microscope.” “To deck the house of the Lord in wreaths of joyous flowers and ever-living germs of vegetation on the anniversary of the day that gave to the world a Saviour, a Redeemer and a God, must surely be deemed an act of piety.”

With these words, prettily uttered, did Mistress Angelica confound those who were quoting from the heretical Observation, and she went on, still remembering the Microscope:

“An evergreen is the emblem of the eternal spirit; and the coming of our Savior was certainly a matter of vital interest to all who believe in the existence of a soul. What then can be more reasonable, or what more proper, than that each return of the anniversary of that event should be marked by demonstrations of joy, and acts of good will to all mankind? Shall then the temples, erected expressly for the worship of God, be the first to be exempted?”

What could they answer, the doubters. One pictures them standing with rapt attention while the face of Mistress Angelica became grave.

“Would this modern Jeremiah have all our forms of worship dressed eternally in the sable garb of woe, and banish from our sanctuaries all those wreathed smiles and looks of honest cheerfulness which are the offspring and attendants of virtue? We trust not. At all events, if he is in favor of this gloomy, dark and dismal system, we trust he will find but few to second his unnatural, and we believe un-Christian wishes.”

Thus Mistress Angelica and the girls who were decking the church with garlands went at their work with new zeal, voicing their hearty disapproval of Observation and his gloomy ideas.

And so the church was verdant with evergreen when the good men and women of Albany filed in on Christmas morning, 1826, to hear the story of the wise men, and the Child of the manger.

If church was the formal occasion of the day, everyone knew that the afternoon would be devoted to another occasion, less serious but no less rigidly adhered to. Long before Christmas day, the odor of spices could have been remarked, coming from the witchens of the old Dutch houses. The “Microscope” had something to say about this, too:

“The practice also of passing round the merry can and partaking reasonably of the enlivening and invigorating glass, is truly appropriate, and can lead to no evil tendency among people of common sense. It warms the heart and arouses those feelings of generosity and humanity, which are so becoming to the human character, especially at this auspicious festival.”

Passing around the “merry can” was part of a custom which had existed ever since the oldest burgher could remember. This was the annual quaffing of copious libations of a mixture of spiced liquor, which the Dutch residents denominated “hot stuff.” This custom undoubtedly originated with the circulation of the Wassail bowl among the merry forefathers of this Albany of 1826.

The “Microscope” likes these antique manners:

“I like them well – the curious preciseness
“And all-pretending gravity of those
“That seek to banish hence these harmless sports
“Have thrust away much ancient honesty.”

So much for the day that Mistress Angelica lived with thrilling heart. The evening was to come, an evening spent before the Yule-Log which still burned brightly in the hearth. In the servants’ quarters hung the mistletoe still, and young men were plucking a berry from it each time they caught a lass beneath its greenery, until the last berry was gone and the sport ended.

And so Christmas drew to a close in the year 1826 and Mistress Angelica went back in her room to try to put all these things out of her mind. Which presently she did, and dreamed of young apprentices with segars and walking sticks, little darkies showing the yaller upon the windowpane.

ABOUT THE AUTHOR
Parker Lloyd-Smith was son of the late Supreme Court Justice Walter Lloyd-Smith, a graduate of Princeton and a Rhodes scholar at Oxford. He worked on the Knickerbocker Press and the Albany Evening News from 1926 to 1928. First assigned the obituaries, within six months he was covering City Hall, where he was well-liked, and a little later he was editor of the Sunday magazine section. A forward thinker and local activist, he was Secretary of the Albany Air Board, lobbying hard for what would become Albany Airport; he also spearheaded the effort to install a carillon atop Albany’s City Hall. He wrote the above story at age 24.

In 1928, Time Magazine offered Parker a job as Associate Editor, and in 1930, as Managing Editor, he helped Henry Luce launch Fortune Magazine. 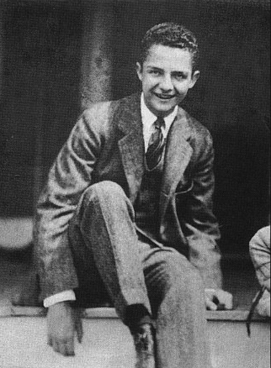 Late at night on September 16, 1931, Parker Lloyd-Smith jumped naked to his death from the 23rd floor of his fashionable apartment house at 12 E. 86th Street, just off Fifth Avenue, where he lived with his widowed mother. He left her this note:

“Mother Charm: The heat is frightful – but this is a farewell – if this is waiting – I will wait for you.