The Livingston Avenue Bridge is the graceful and anachronistic swing bridge that carries trains across the Hudson River at Albany and still swings open to let larger ships reach Troy. The account of how the Bridge came to be built is fascinating, as it relates to how things get done in Albany and the role it played in American history.

The earliest bridge across the Hudson, at Waterford, was completed in 1804, by Theodore Burr, but the bridge was far from the population centers of Albany and Troy. NYS legislation was introduced in 1814 to provide a bridge near Albany, but Troy objected, believing it would obstruct navigation to Troy. Over 50 years, during which the Erie Canal opened and railroads were invented, squabbles over the bridge and its location continued. Meanwhile, people crossed the Hudson River by ferry boat. (That’s why there are North and South Ferry streets in Albany.) Even Lincoln’s funeral train car came across from Rensselaer to Albany by boat.

After decades the Hudson River Bridge Company was finally incorporated in 1856 for the purpose of erecting and maintaining a railroad bridge from Albany to the opposite shore. The bridge was to be set at least 25 feet above the common tide, “so as to allow under it the free passage of canal-boats and barges without masts, with a draw of sufficient width to admit the free passage of the largest vessels navigating the river.” (The “draw” is the bridge section that moves.)

But bridge opponents didn’t give up. A lawsuit seeking to restrain the Company reached the U.S. Supreme Court. And as late as March 8, 1864, a legislative amendment proposing to reduce the width of the draw was taken up in the state Senate, the subject of a speech by longtime opponent Major General Daniel E. Sickles, a legend of a man.*

Enter titan of the Gilded Age, Cornelius Vanderbilt (a/k/a The Commodore). At the start of the Civil War Vanderbilt realized that a transcontinental railroad would slash travel time from coast-to-coast by months and understood the importance of railroads when the War ended. He sold most of his shipping interests to invest in railroad lines, including the Hudson River Railroad line, controlled by Erastus Corning, great grandfather of Albany’s long term Mayor Erastus Corning II. The bridge was finally built.

The first engine, the Augustus Schell, passed over the bridge on February 18, 1866. Passenger trains started using it on February 22. The bridge had no particular name (and no need for one, being the only bridge). It spanned 1,953 feet, with a draw 257 feet wide — and cost $750,000, a nifty 50 percent overrun from its allocation of a decade earlier.

Now Vanderbilt made his move. It was brilliant. He owned the only bridge across the Hudson, leading in and out of New York City – the gateway to the country’s largest port. He cut off the bridge to rival railroad traffic. Without the bridge, every other railroad was shut out of NYC, Before their stocks become worthless, the rival rail road presidents try to sell their shares. When Wall Street realizes, there’s a massive sell off. And when the price fell, Vanderbilt buys their stock for pennies. In just days, he creates the largest single railroad company in America which was to become the New York Central Railroad, controlling 40% of the nation’s rail lines. (When Vanderbilt died he was the worth about $200 billion in today’s dollars, making him the richest man in America at the time.) 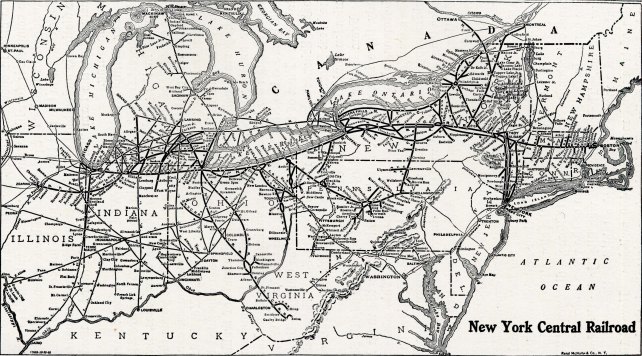 And STILL there was wrangling over the Bridge. A NYS law passed in 1868 directing the bridge company to build a new bridge and to demolish the previous bridge as soon as possible. If it did not do so, Albany or Troy had the right to do so and bill the company. Something must have changed by 1869, however, as another act authorizing a new bridge was passed. The Upper or North Bridge remained and was joined by another bridge at the foot of Maiden Lane in Albany, which opened 1871. Less than a year after that, in October 1872, the Union Depot opened. (The “new” Union Station that stands on that spot was constructed in 1899.)

ventually the two bridges were given specific assignments: the lower bridge, the Maiden Lane Railroad Bridge (demolished c 1971), with its easier access to the Depot, carried passengers: the upper bridge carried freight and foot traffic (at two cents a crossing). It skirted Arbor Hill and allowed trains to barrel through Tivoli Hollow to destinations in the west.

There are claims that the Upper Bridge, which eventually came to be known as the Livingston Avenue Bridge (for the adjacent street that then ran all the way to the waterfront), dates to the 1866. Not exactly; the superstructure is from 1901. A letter in The Bridgemen’s Magazine in July, 1902, indicated that:

“The A.B. [American Bridge] Co. are making fine progress with the Livingston avenue bridge across the Hudson. The last through span has been riveted up and there remains but seven girder spans to go in on this contract, besides the draw, which will be placed in position after the close of navigation.”

It’s not clear if the limestone piers from the original bridge were maintained, or perhaps reduced in number; through filling, the river is now considerably less wide and the bridge appears to have only eight or nine piers. But the current piers look so much like those of its predecessor it’s quite likely the piers are original

FYI – a third span across the Hudson, the Greenbush Bridge, was constructed in 1882 by a private company that initially charged a toll. That Bridge was replaced by the Dunn Memorial Bridge in 1933, named after World War I Congressional Medal of Honor recipient, Parker Dunn, from Albany. That was demolished in 1971, following the completion of the current bridge of the same name in circa 1968.

*Sickles was a very interesting and notorious guy with a penchant for the ladies. He served in the NYS Senate and U.S. Congress. While in Congress he killed Francis Scott Key’s son in a love triangle and invented, with attorney Edwin Stanton, the temporary insanity defense. He went on to serve in the Civil War, lost a leg and won the Congressional Medal of Honor for his actions at the Battle of Gettysburg. A very full life.

Thanks to Carl Johnson and his post in Alloveralbany.com from 2011 for much of the information included here.