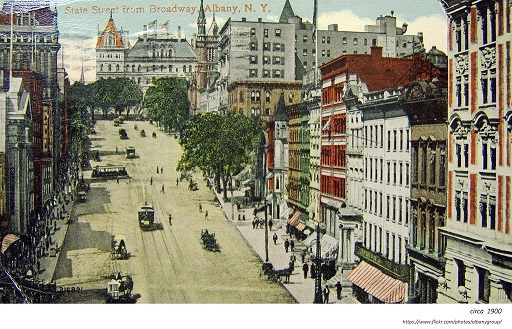 Cities are always re-inventing themselves. Where possible development spreads out, or if not, existing buildings are demolished, new ones rise in their place, or old ones can be re-cycled. Sometimes it happens slowly over time, and sometimes it seems to occur all at once.

With a few exceptions I always thought it mostly happened slowly in Albany. But then I found a partial diary/memoir of my Gram Kate, born in 1901 in Arbor Hill. And as I read it became apparent to me just how much downtown Albany changed in a brief decade – from 1910 to 1920. There was a building explosion – Albany was permanently altered in what must have been a blink of an eye.

In 1909 she stood on the Capitol steps with about 2,500 Albany school children as participant in Hudson Fulton Celebration (celebrating 300 years of New York history). The view in 1909 from the steps when she was 8 changed dramatically by the time she was 19 in 1920. There were other downtown changes, as well.

And curiously a number of those were driven by advances in technology (which we rarely think about).

And when she crossed the Viaduct, and made her way over North Swan, she would see the new Arbor Hill Movie theater , where she would get a really good part-time job playing the organ for the silent flicks on weeknights when she was 16. (Although she would be riddled with guilt because it was mainly because the boys were off to War, and wonder how much the fact her father’s barbershop was next door to theater had to do with it. 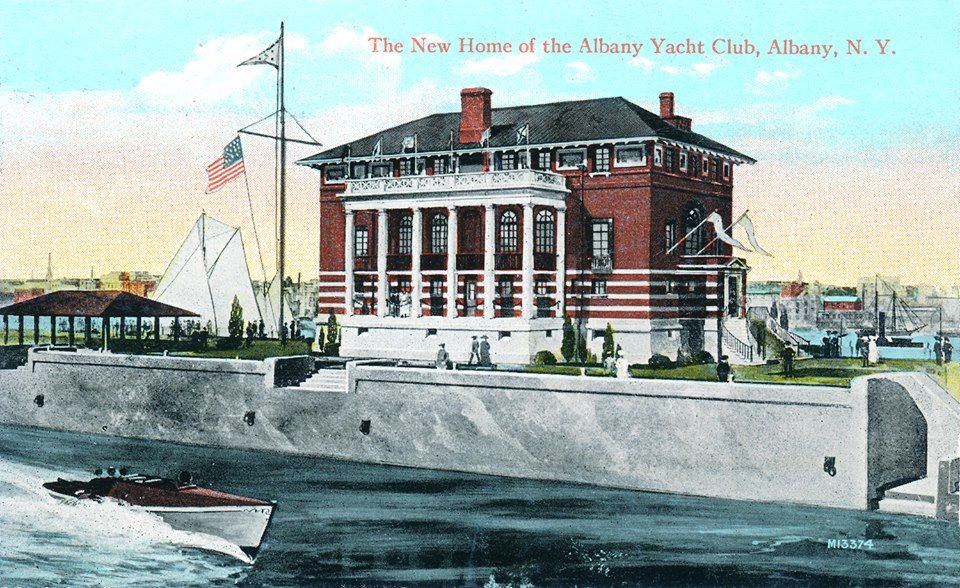 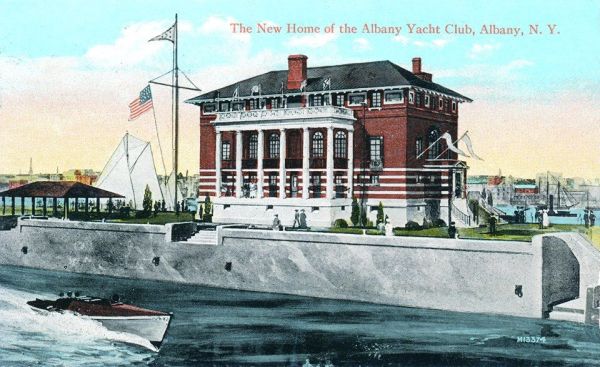 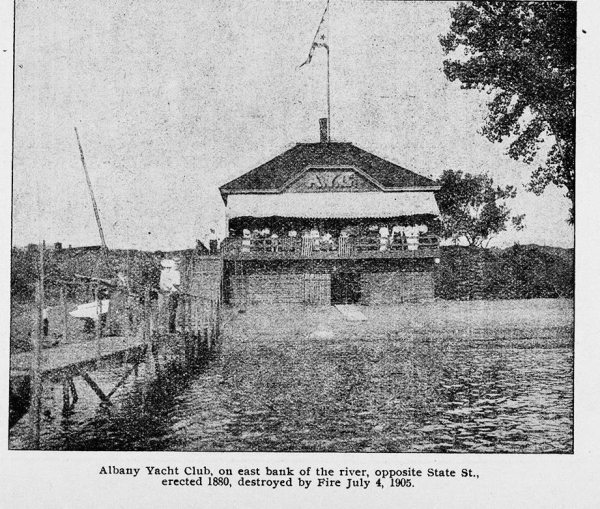 The Albany Yacht Club was founded in 1873. Its first locations were in Albany near the base of State St. By 1880, it moved to the Rensselaer side of the river, opposite the steamboat landing, but that building was destroyed by fire in 1905.The Club made due in an old building on the Albany side of the River until 1909 when it decided to build a modern and relatively palatial 2 story Clubhouse. The new building, finished in 1910, was located on one end of a pier, leased from the City, across from Maiden Lane. Shortly thereafter the City constructed a municipal “Recreation Pier” on the other end, with a bridge running from Maiden Lane to the pier. 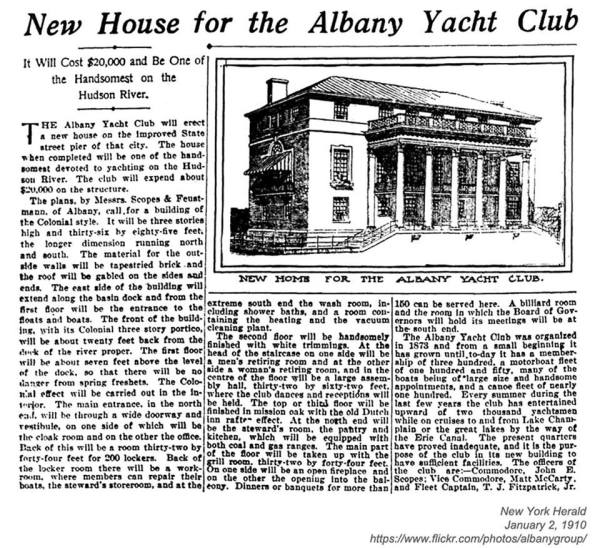 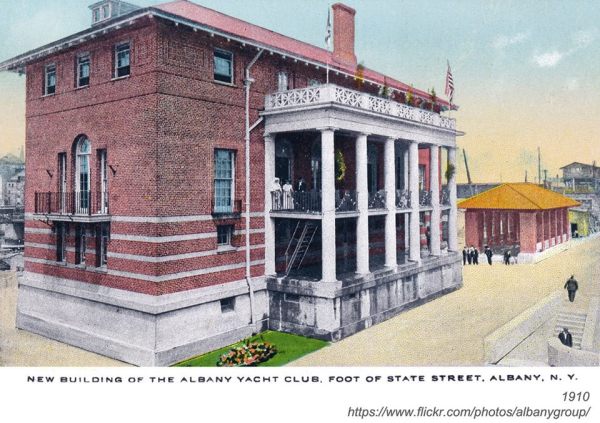 The Yacht Club membership grew with advent of the motor launch. The annual Albany – NYC race and regattas drew thousands of spectators. The events became an integral part of City life. 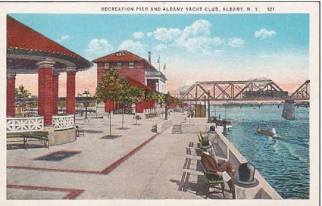 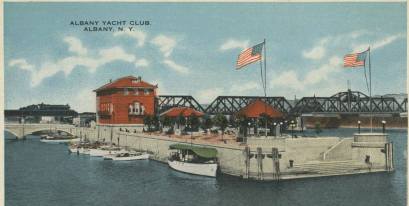 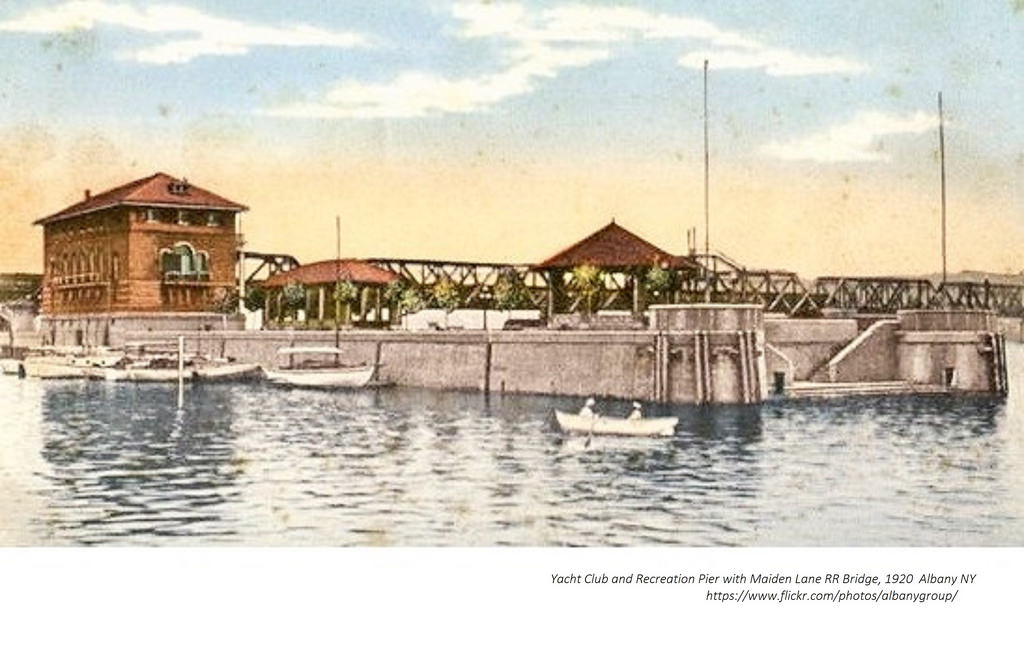 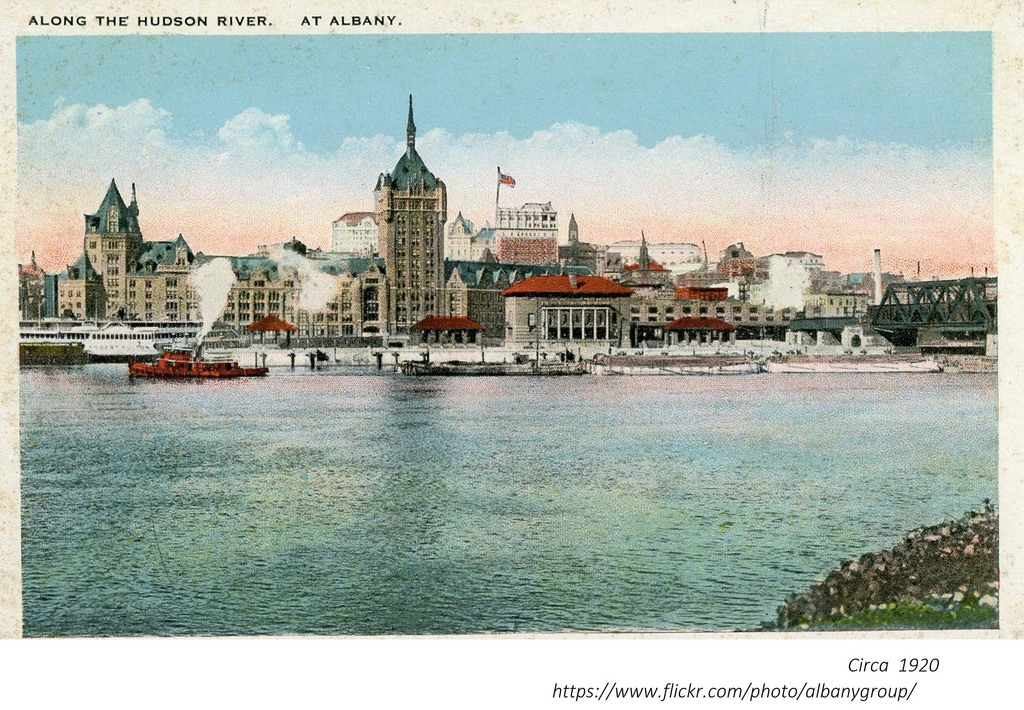 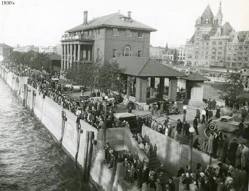 In 1942 the Yacht Club Building took on a new life and the upper floors were leased to the USO for its Albany headquarters during World War II. The building’s proximity to Union Station, packed with trains full of servicemen day and night, was the main reason for selection of the site. When the War ended, the Club returned despite the wear and tear during the War years. But there was still one more life for the building. In 1949, the building was acquired by the federal government, commissioned as the local Naval Reserve Center, and a 3 inch gun was mounted on the pier outside the Clubhouse. 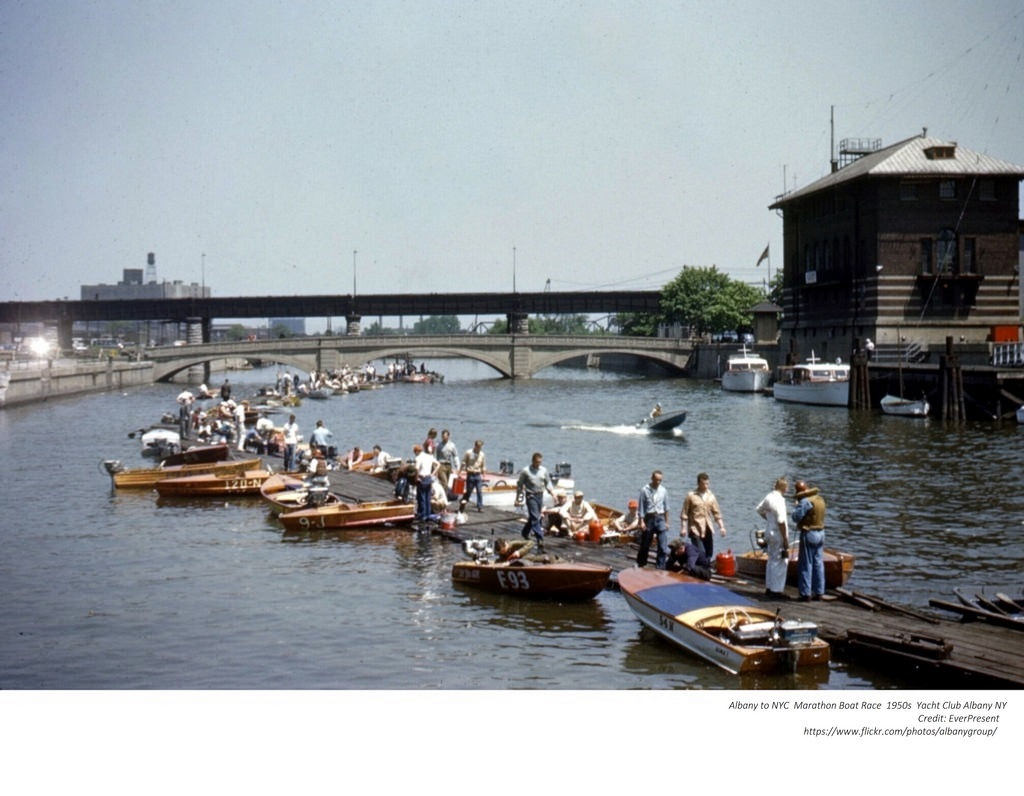 The Clubhouse had survived 40 years, but the inability of the City to allocate the necessary resources to maintain the concrete piers during the Depression and War years, coupled with decades of winter ice and the river’s spring risings, took their toll. A large portion of the pier crumbled into the river in 1946; another hunk broke off in 1952. Although there were discussions about repairs, there were also discussions about a highway to run parallel to the river.

The Yacht Club met in temporary quarters until 1954 when a new Clubhouse was constructed in Rensselaer. Construction was begun on a new Naval Reserve Center on the corner of N. Main and Washington Ave in 1955. The City took possession of the Yacht Club building. Subsequently, the Clubhouse, the bridge from Maiden Lane to the pier and the pier, along with the old Day Line steamship sheds north of the pier, were demolished and the Yacht Club basin filled in to widen Quay St., and create a municipal parking lot. 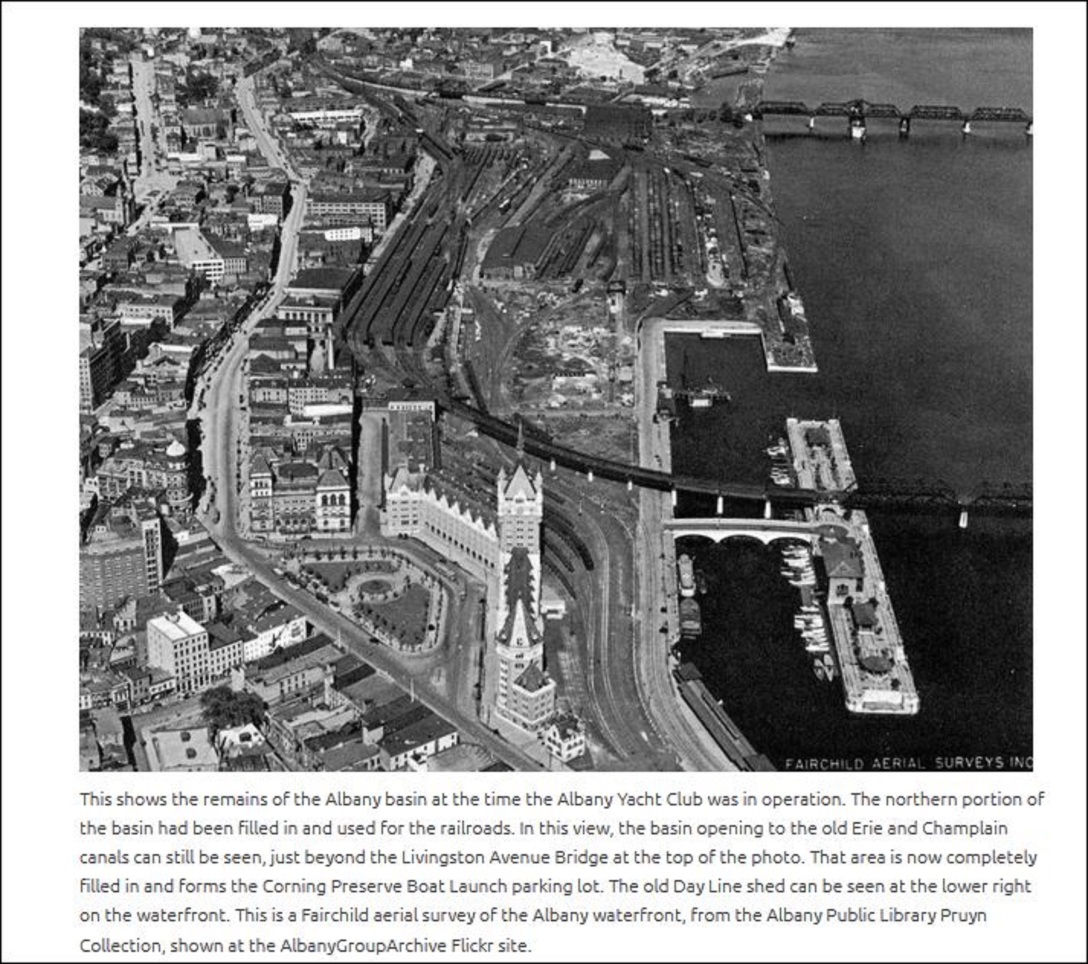 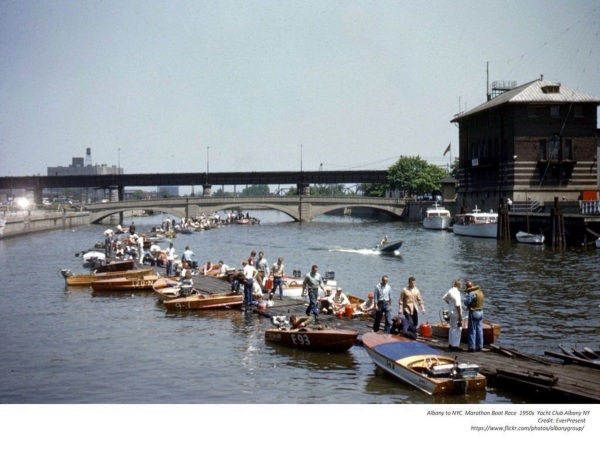 Somewhere around 1949, the Albany Yacht Club buildings were sold for use as a Naval Reserve Center, and the club started its move across the river to Rensselaer, with a temporary stop in the old Day Line facilities. By the mid-1940s the ice in the Hudson had taken its toll on the  Club pier and the municipal pier. 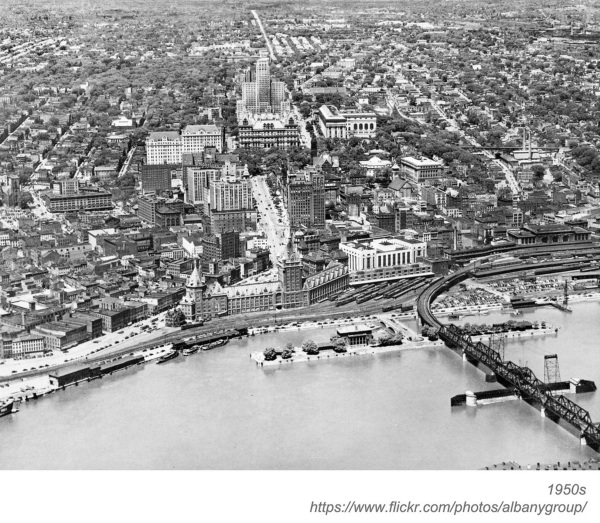 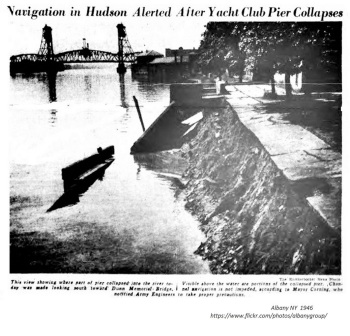 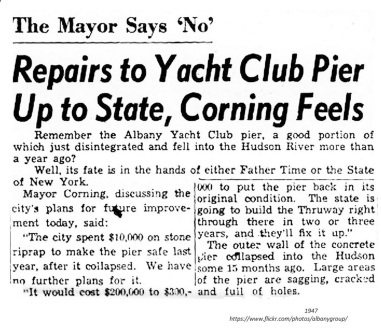 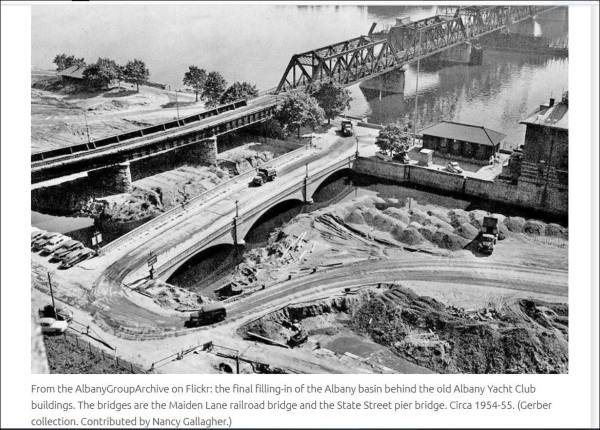 In 1954, the old basin would finally be filled in as work began on the riverfront arterial highway – I-787. On Nov. 9, 1954, workers started “with the preliminary task of tearing down the old Hudson River Day Line shed, an Albany landmark since the late 19th Century. Between now and next November, when the job is scheduled for completion, the contractor will fill in the old Albany Yacht Club basin for a 1,000-car municipal parking lot and build a ¾ mile stretch of four-lane concrete roadway from a point near the old Day Line landing north to the Livingston Ave. railroad bridge.”

As with all things Albany, the inconvenience for parking was a concern:

“The demolition and construction work will be a source of woe for scores of riverfront parkers, who will have to find somewhere else to leave their cars. Some of the cars that had been left near the Day Line shed today had to be moved by police for safety when the wreckers attacked the ancient ironwork with acetylene torches.”

The construction would involve razing buildings and building a stone dike in the river to straighten the shoreline from “the Quay st. bulge at Steamboat Sq. to the old Yacht Club pier, now occupied by the U.S. Navy as a Naval Reserve training center. The section between the present shoreline and the dike will be filled with stone and graded for parking space. At the same time the contractor will extend three city sewers, whose outfalls will have to be moved toward the middle of the river before grading for the roadway can begin.”

Those included the Columbia St. sewer, “which carries much of Albany’s rainstorm runoff from the downtown section,” and the Quackenbush sewer, near the north end of the project.