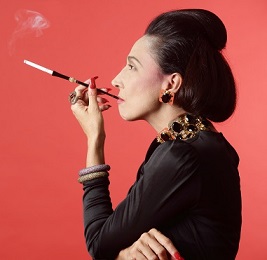 Albany is full of fascinating stories. This is a little known story about a woman who came to Albany as a newlywed in 1924, and then went on to have a major impact on the world around us. It’s taken me about 40 years to connect the dots; it started with a pair of cuff links.

I was raised by my grandparents. My grandmother was mostly a lovely woman, born in Albany at the turn of the 20th century, and she told me the Albany stories. And never stopped. Ever. (Gram could talk the ears off a wooden Indian.)

Fast forward decades – I’m digging through bits and pieces of inherited family “stuff”, and find my grandfather’s tuxedo cuff links and studs. Nice items – gold filled by a company called Krementz. And wham.. I can hear my grandmother’s voice from long ago – “Your grandfather bought those because he liked Reed Vreeland’s, but I think Reed’s were from Cartier.”

Yikes!!! The light bulb finally went on! Reed Vreeland was the husband in the newlywed couple; his wife was Diana – who would become “The Empress of Fashion”, known not just in America but all over the world. Diana Vreeland lived in ALBANY? How could we fashionistas not know that? And how did my grandmother know Reed Vreeland? More importantly, did she know his wife Diana?

It turns out Reed and my grandfather were in the Mendelssohn club, a men’s chorale society that still exists today in Albany. But more about that later.

T. Reed Vreeland was the son of Herbert Vreeland (from a Dutch Settler family that hailed, in part, from Albany in the 1600s), born in the Town of Glen in Montgomery County. Herbert became a self-made millionaire, owning most of the street car lines in New York City.

Reed came to Albany to work for the National Commercial Bank in 1922. In summer 1923 he met Diana Dalziel at a debutante event in Saratoga Springs. (Diana was born in Paris – her mother was French; her father British. They emigrated to the U.S. shortly before World War I.)

Apparently it was love at first sight and they married in March 1924. The happy couple lived initially in a small house on Spring St.in Albany. Diana said, “I loved our life there. I was totally happy.” They lived in a “cozy cottage” and young Diana was enjoying domesticity – being a housewife and then a mother.

Back to the Mendelssohn Club

The Club was founded in 1909. In the 1920s the conductor was Dr. Frank Sill Rogers, organist and choirmaster for St. Peter’s Episcopal Church. With the men from his choir as a nucleus, he used his connections with other choirmasters to enlist male singers. Soon, there was hardly a male choir singer in the city who wasn’t a member. My grandfather was a church organist and a protégé of Rogers, so of course he sang with the Club. Reed loved to sing and had a great voice, so he joined the Club. The Club performed their concerts in white tie and tails (which explains the cuff links and studs). 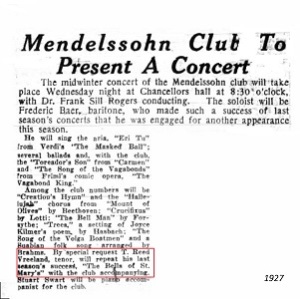 The Vreelands moved to the highest echelons of Albany society. Diana was a member of the Junior League. While in Albany Diana became a U.S. citizen. Their family grew (they had 2 sons) and they moved to a larger house at 409 Western Ave. (now Medaille Hall at the College of St. Rose.)

In 1927 Reed was offered a job in London, and that’s where Diana’s story really begins. They moved in glittering circles of British Royalty (she was presented at Court in 1933) and wealthy American ex-pats. Diana opened a small shop and sold exquisite and alluring handmade lingerie from France. One of her customers was another American – Wallis Simpson. (Was Diana’s sexy lingerie responsible for the Abdication? She later boasted, “My little lingerie shop had brought down the throne.”)

In the mid-1930s the Vreelands returned to America. Diana spent the next 40 years as an editor at “Harper’s Bazaar” and then as editor in chief at “Vogue”. She was Jackie Kennedy’s fashion advisor while Jackie was in the White House. Her time at “Vogue” changed the world of fashion and changed how women viewed themselves in the world. She liberated women – allowed them to be free from the constraints of stiff petticoats and white gloves, and advocated for woman’s right to wear pants. She declared denim divine.

And for a last act she served as a special consultant to the Costume Institute of the Metropolitan Museum. She, more than anyone else, helped the world see that costume and fashion are an expression of self; great couture is the work of great artisans in ateliers, artists and designers – that clothing can be a political statement. She was the first editor to mix main street with couture fashion and include politicians, movie stars and rocks stars and sports figures in that world. She put fashion photography on the map – made it legit.

It’s hard to imagine Diana Vreeland, the queen of the outrageous who lived out loud and had an opinion on everything, in Albany. She’d already been on the best dressed list twice by the time she came here, wore blood red nail polish and lipstick, and was said to have painted her Spring St. living room canary yellow and put down a zebra skin rug. How did the people of Albany – not known for their avant garde sensibilities – react to her?

Apparently we were kind and gracious. Later in life she said it was the happiest time of her life . It was a world of “good food, good housekeeping, polished floors, and polished brass.” (The Discreet Charm of the Bourgeoisie?)

Her biographer Amanda Mackenzie Stuart said she liked Albany’s domestic Dutch style. In the one photo I’ve seen that would have been taken while she was living here, Diana looks just like any other doting mother.

“It’s not about the dress you wear, but it’s about the life you lead in the dress.” .. DV