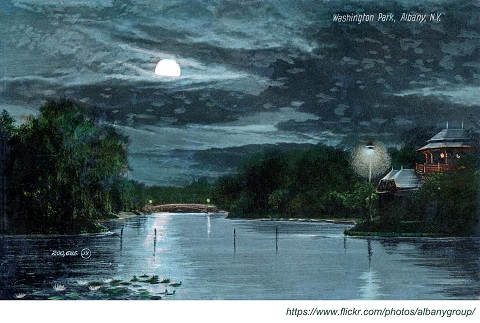 It’s been hot and steamy in Albany the last couple of days. Can you imagine what an oasis the Park must have been in days before electric fans and AC?
During the evenings in the summer there were frequent band concerts in what was, in the early 1900s, the middle of the city.
The Park closed at night, but I have it on good authority that didn’t deter young boys and men (and even a young woman or two) from sneaking a quick cooling dip in the 5 acre lake on a hot summer night.
And it was also an irresistible location for romantic trysts in the moonlight (per the same good authority) on those same nights. Couples might quietly slip away from the audience, and blend into the 89 acres of shrubbery and trees.
Copyright 2021  Julie O’Connor
Loading Comments...