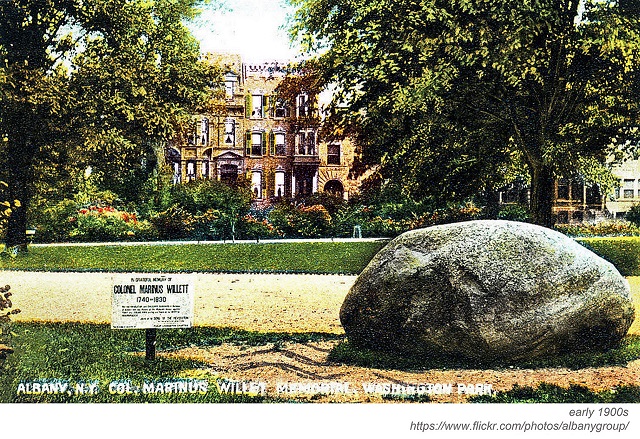 A great question and timely too. The boulder is known as “Willett Rock” and commemorates Lt. Colonel Marinus Willett, a soldier who played a pivotal role in the American Revolution and went on to be mayor of New York City in the early 1800s.

But what does that have to do with Albany? A LOT!! 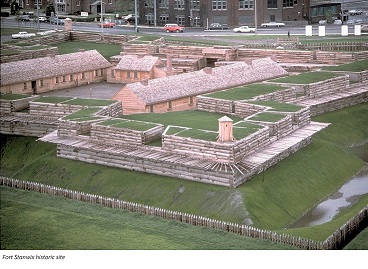 In summer 1777 British forces under Lt. Colonel Barry St. Leger were making their way east along the Mohawk Valley to join General Burgoyne coming down from the north – objective Albany. The British were making their way up the Hudson as well and there was no doubt Albany would be occupied by the British. It was only a matter of time. Albany was a strategic and tactical target. Albany, as the epicenter of the Northern Department of the Continental Army, was the site of military storehouses, warehouses, a powder house and armory. It was the staging area for all American troops in the Northern Department as well as the site of the military hospital (at Pine and Lodge). More importantly, occupation of the Hudson from Albany to New york City would give British control of New York State and separate New England (thought to be the heart of the resistance) from the other colonies – dividing the burgeoning Union.

Albany in Peril
The city was faced with the prospect of “savage butchery and unscrupulously soldiery” under the British and their Indian allies. It was a long hot summer of terror. The city was over-crowded, filled with people who had fled to Albany in the face of Burgoyne’s march south. Extra supplies were being stockpiled in the Fort at the top of the hill. Those planning to stay were prepared to defend the city (People were ready to bury their silver and hide their daughters.) Others were getting ready to flee. Albany would be trapped by the approaching British from the south, west, north and by the River on the east. 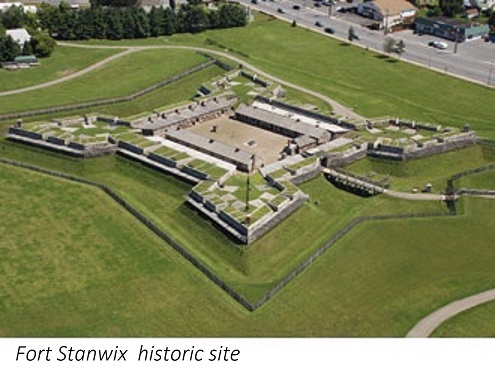 But the British plans fell apart west of Albany at Fort Stanwix* and the Battle of Oriskany. Fort Stanwix (known then as Fort Schuyler) was first surrounded by the British, Indians (lead by Joseph Brant) and Tory and Hessian contingents on August 3, 1777, when the Fort refused to surrender. Inside the Fort were American troops under Colonel Peter Gansevoort**. His second in command was Marinus Willett. 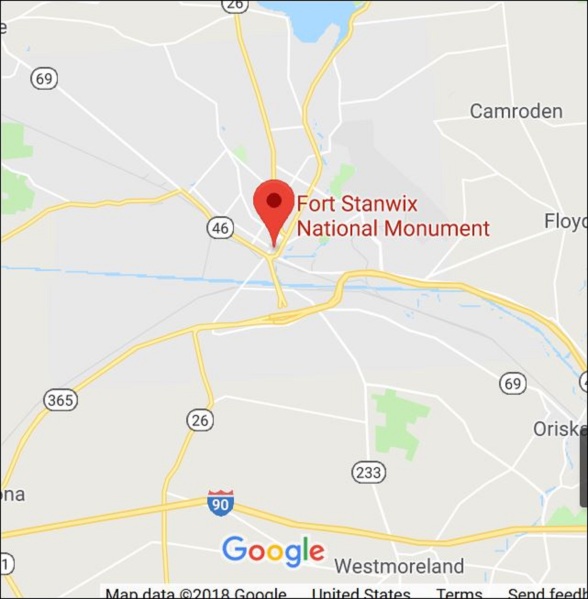 Old Glory
But let’s stop here for a moment – on the second day of the siege legend has it that the American flag was flown in battle for the first time. Willett recalled, “…………..a respectable one was formed the white stripes were cut…the blue strips out of a Cloak…The red stripes out of different pieces of stuff collected from sundry persons. The Flagg was sufficiently large and a general Exhilaration of spirits appeared on beholding it Wave the morning after the arrival of the enemy.”

Battle of Oriskany
On August 4 part of the British force (primarily the Indians) ambushed American forces at Oriskany, east of the Fort. The Americans were routed in one of the fiercest and bloodiest battles of the War. But a party of about 250 soldiers in the Fort, under the command of Colonel Willett, took the opportunity to raid and loot the British camp, making away with dozens of wagons of supplies.

The British Bluff
St Leger’s command was demoralized, but banking on the victory at Oriskany he sent yet another surrender demand to the Fort. It included news (fake) that Burgoyne was in Albany, and threats Indians would be permitted to massacre the garrison and destroy the surrounding farms and communities. Willett replied, basically saying .. for a British officer you are sooooo ungentlemanly (and by the way, our answer is no).

The General’s Ruse
On the night of August 8th, Gansevoort sent Willett and another officer east, through British lines, to notify General Philip Schuyler (commander of the Northern Department) of their situation. In route they met General Benedict Arnold on his way to relieve the Fort. Although he only had a force of about 700 -800, Arnold crafted a genius disinformation campaign (involving a captured local Loyalist) to spread the word he had 3,000 troops. St. Leger’s force by that time was dwindling, through defections from the annoyed Indians (after all, Willett had stolen all their stuff and the siege was dragging on) and Hessian desertions.*** He was faced with seemingly overwhelming odds. St. Leger broke off the siege on August 22nd, and headed back west.

Victory!
So, the failure of St. Leger to bring additional troops to an already beleaguered Burgoyne led to his defeat less than 2 months later at the Battle of Saratoga (which saved Albany and changed the course of the Revolutionary War). Way to go Martinus!
.
Back to the Rock 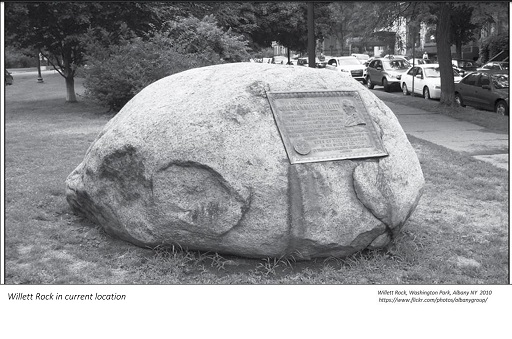 And that is story of why we wanted to honor Col. Willett – his bravery was instrumental in saving Albany.

The granite boulder was placed in Washington Park at the corner of Willett and State streets to honor Willett in 1907 by the Sons of the Revolution. **** 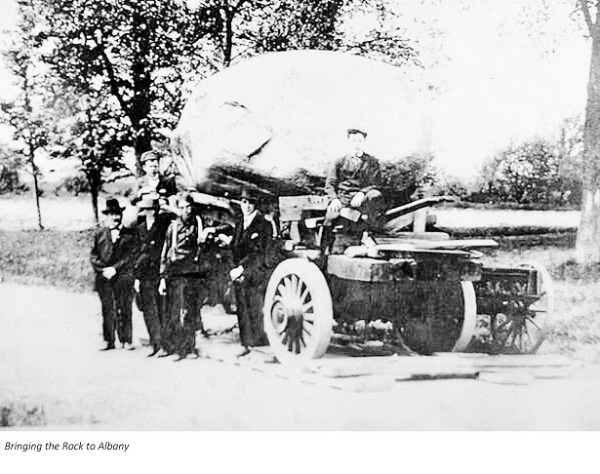 We have never been able to figure why a rock as a monument (rocks are cheap?). We know there was a multi-year search across upstate for just the right rock, but we’re not sure why this particular rock was selected. (It may have come from the Oriskany battlefield, but we’re not sure.)

The plaque on the rock features a profile of Willett and the following inscription:

In Grateful Memory of General Marinus Willett 1740 – 1836 “For His Gallant and Patriotic Services In Defense of Albany And The People of The Mohawk Valley Against Tory And Indian Foes During The Years of The War For Independence, This Stone, Brought From The
Scenes of Conflict And Typical of His Rugged Character, Has Been Placed Here Under The Auspices of The Sons of The Revolution
In The State of New York By The Philip Livingston Chapter
A.D. 1907″

*Fort Stanwix is a national historic site in Rome NY, north of the NYS Thruway – it’s open 7 days a week, from 9 am to 5 pm, April 1 – December 31.
**Gansevoort would later be promoted to General and was the grandfather of author Herman Melville (“Moby Dick”). He’s buried in Albany Rural Cemetery – Section 55, Plot 1.
*** The Hessian troops were the Hanau–Hesse Chasseurs. During the siege and battle they discovered they were in the middle of verdant and fertile farmland, much of the local population spoke German as their primary language and there were many pretty girls. Genealogies of the area are filled with Hessian soldiers who deserted the British army and ended up in the small villages of the Mohawk Valley populated by German Americans. They could blend in and no one would be the wiser.
**** This memorial was originally located elsewhere in the park, but was moved to its present location several years ago (we believe after having been struck several times by cars missing a sharp turn). 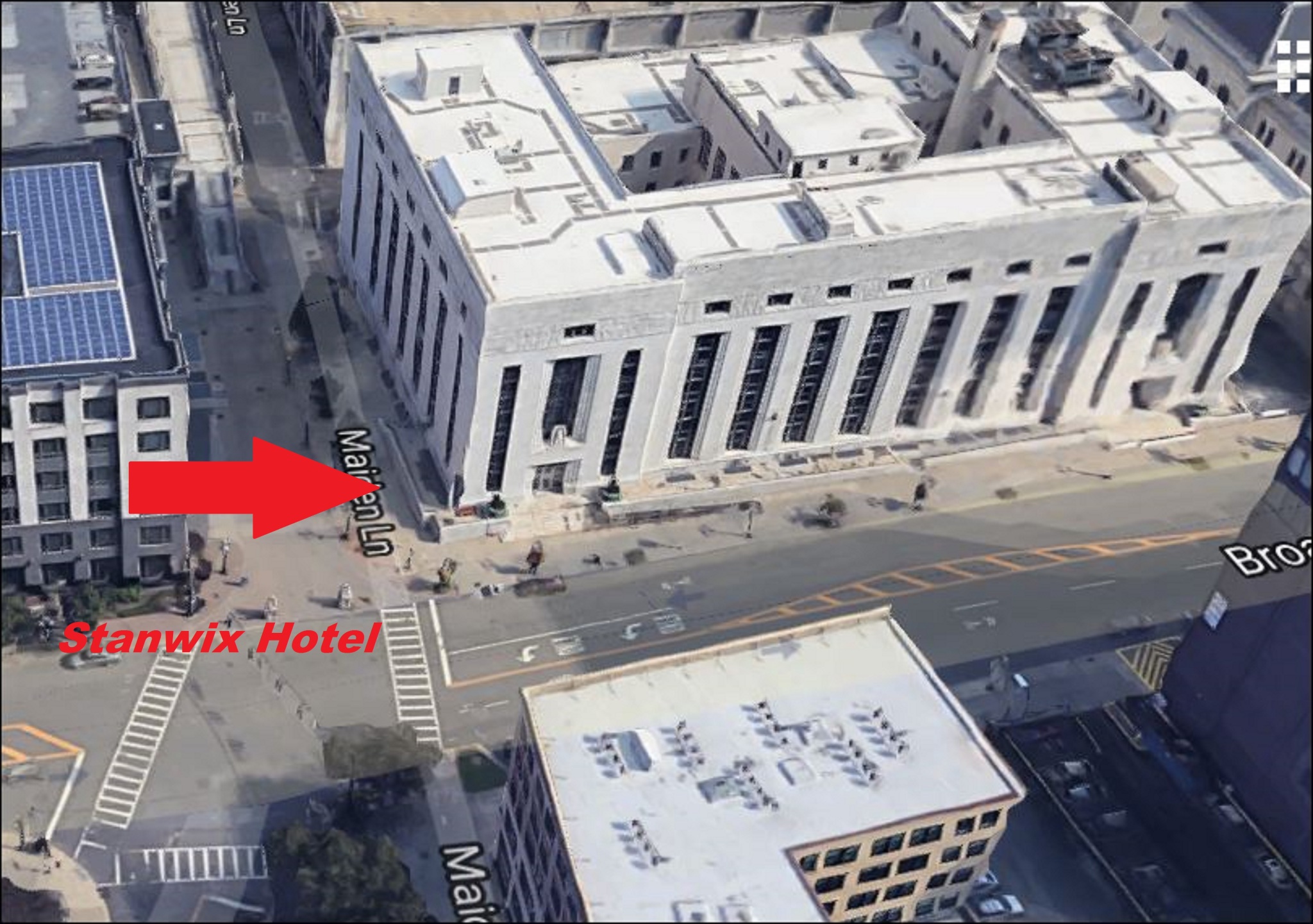 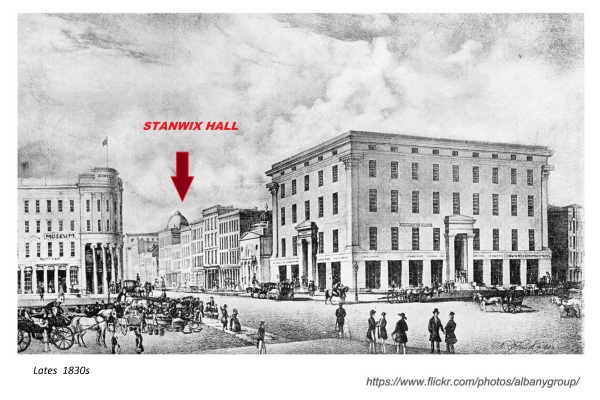 Stanwix Hall stood on the east corner of Broadway and Maiden Lane. .It was built by the sons (Peter and Herman) of Peter Gansevoort. Gansevoort* was the “Hero of Fort Stanwix”; he lead the patriot resistance at the British siege of the Fort in 1777**.  Colonel Gansevoort was instrumental in guarding against British encroachment on Albany from the west through the Mohawk Valley, and setting the stage for the defeat of Burgoyne at Saratoga a year later. 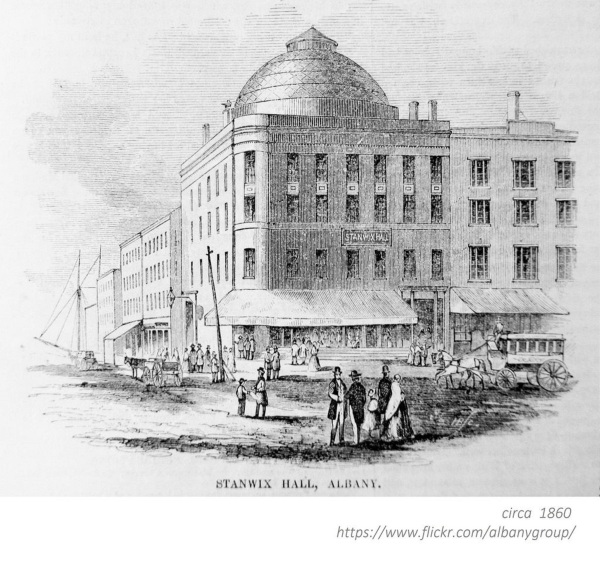 The Hall was built on the land on which Gansevoort’s Dutch great grandfather settled in the 1600s and on which he established a brewery. In 1832 the brewery was destroyed by a fire and the next year Peter’s sons, Herman and Peter, built the Stanwix in the same location on Broadway (then North Market St.). It was marvel- 5 stories and constructed from marble.  It housed offices, stores and meeting rooms. It was crowned by a huge awesome dome (48’ in diameter), which covered what was said to have been the largest ballroom (60’ wide) in the world at the time. 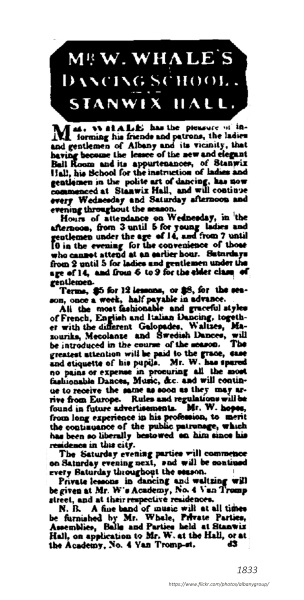 The year it opened it became the home of Mr. Whale’s Dance Academy for the sons and daughters of Albany’s elites. Classes were $12 for the season- lessons were provided Wednesdays and Saturdays and evenings.  Over the next 30 years the Stanwix was the site of glittering balls, assemblies, receptions and concerts with elegant catered suppers.   We have visions of women in huge crinolines stepping out of a row of carriages in the gaslight and whirling the night away in the ballroom with the men of the Albany Burgesses Corps in full dress military uniform.

By the mid-1840s the Hall was transformed into the most elegant hotel in Albany.  It was, by all accounts, the classiest of joints.  It was located close to the train station and was the preferred destination of hundreds of travelers, including the rich and famous (and infamous).  When Abraham Lincoln came through Albany in 1861 on his trip to Washington D.C. for his inauguration, John Wilkes Booth was performing in the city and his rooms at the Stanwix would have overlooked the Lincoln parade down Broadway.

The Stanwix also was the site of an infamous murder that created a tabloid frenzy.  On the evening of June 4, 1868, in the main reception room, George Cole took out his pistol and shot L. Harris Hiscock dead. Cole was a Syracuse physician who served with gallantry and bravery in the Civil War. He’d been wounded and promoted to Major General. L. Harris Hiscock was a leading Syracuse attorney, a founder of the law firm now known as Hiscock and Barclay and Speaker of the NYS Assembly. Cole and Hiscock were close friends. During the War, Hiscock, a widower, and Mrs. Cole had an affair. Cole was tried twice. The defense was insanity; there was a hung jury and the case was discharged. In the second trial, in NYS Supreme Court the jury found reasonable doubt and acquitted Cole by virtue of momentary insanity.

The Infamy of the case seemed to enhance the Stanwix reputation. 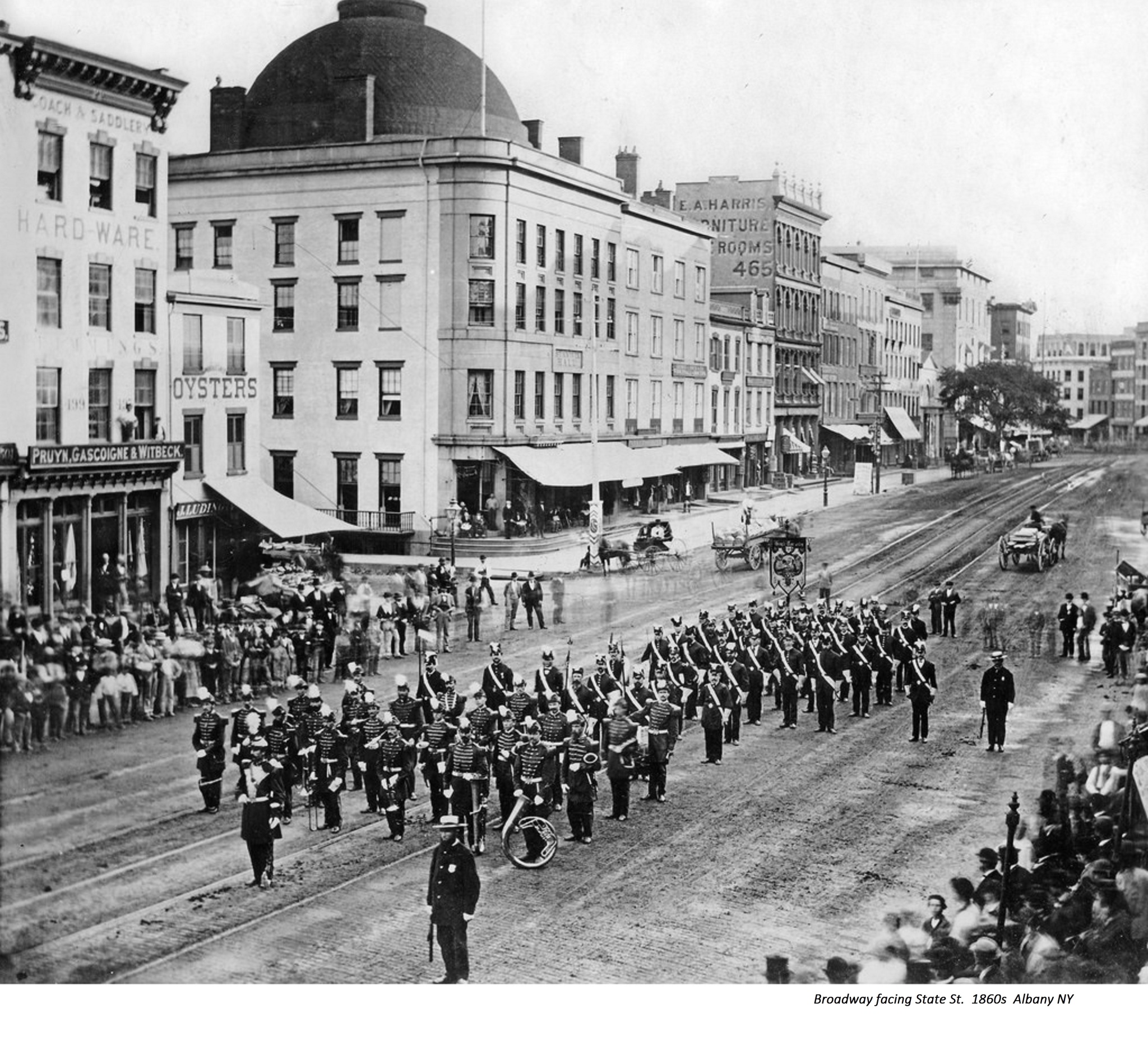 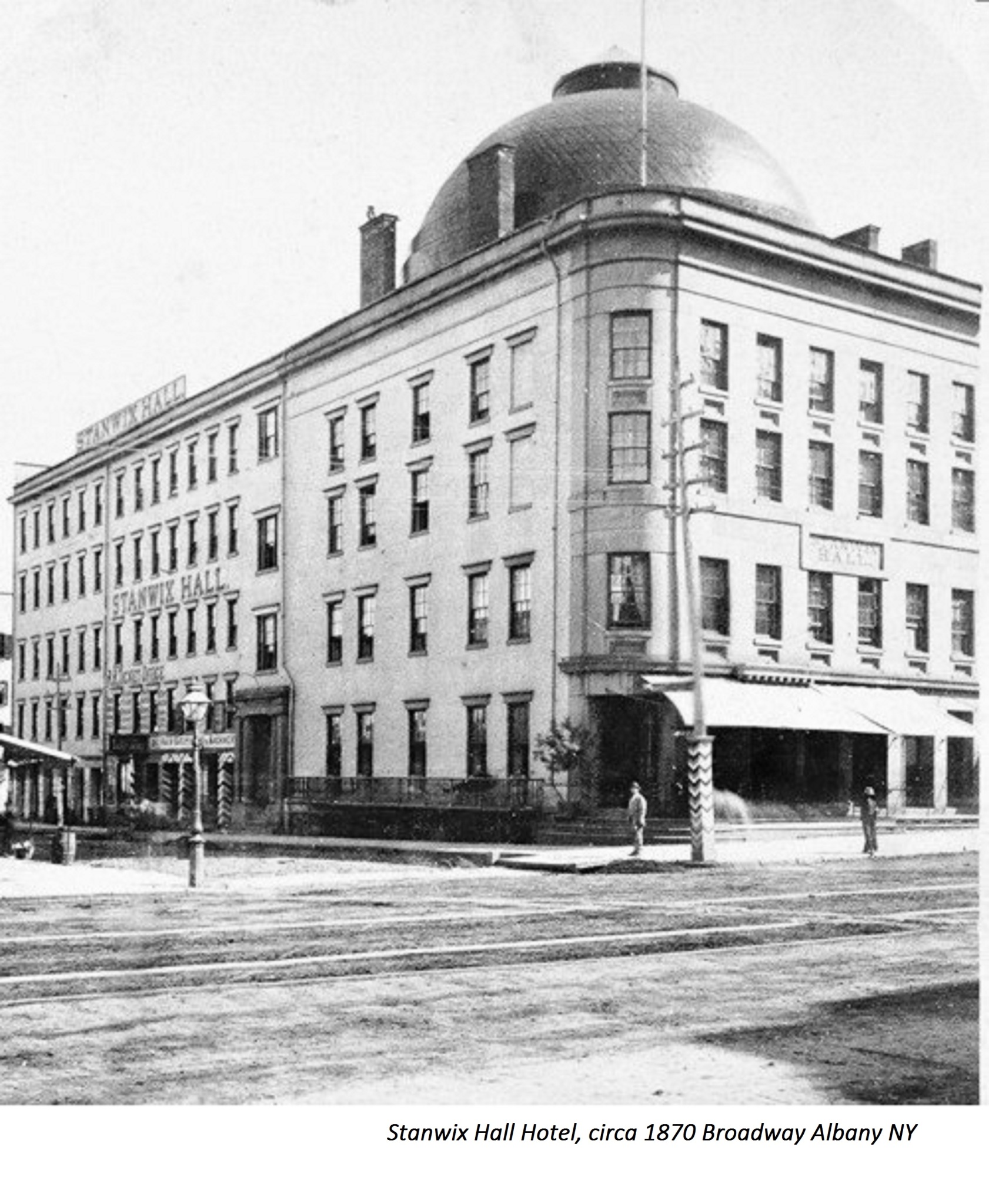 In the 1870s the Hotel was acquired by the Lansing family and continued to be the most splendiferous of its kind. In 1878 it was completely remodeled; the dome removed and 2 stories added. It was retrofitted with modern’ conveniences; steam heating and up-to-date plumbing. Even with the opening of Adam Blake’s Kenmore Hotel on North Pearl St. in the early 1880s the Stanwix maintained its social cachet and was the most expensive hotel in Albany. It continued to provide superior service, excellent cuisine and a superior wine list. Even into the late 1890s it was the still tip top – offering both an American (with meals) and European (without meals included) plans and still very expensive ($3 per night was very steep.) 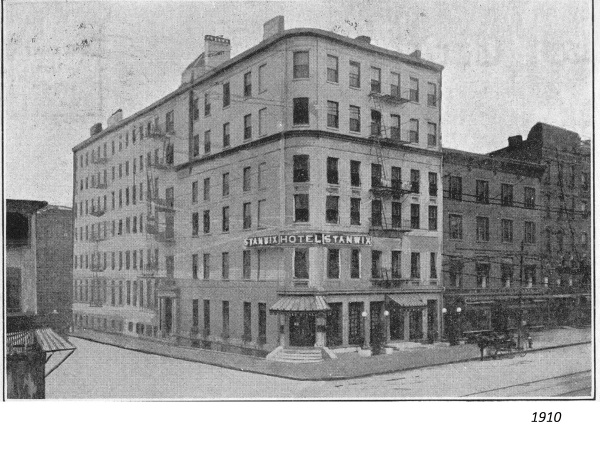 But in the early 1900s it met stiff competition by the new Ten Eyck Hotel on the corner of State and N. Pearl streets, and then the Wellington and Hampton Hotels on State St. were built.  By 1920, it was more of a banquet and convention venue and had become somewhat down at the heels. In the 1920s itwas the bus terminal in the city. 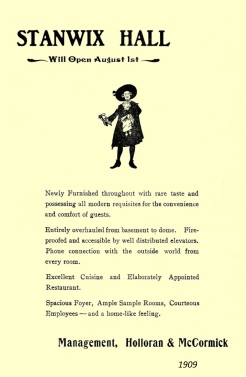 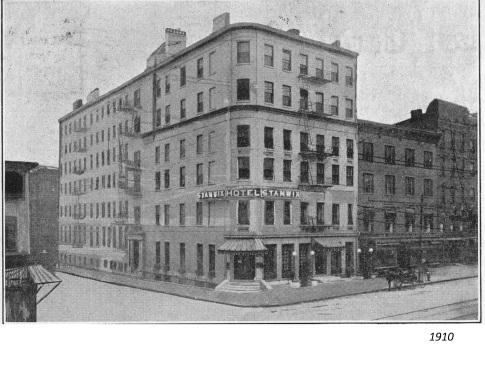 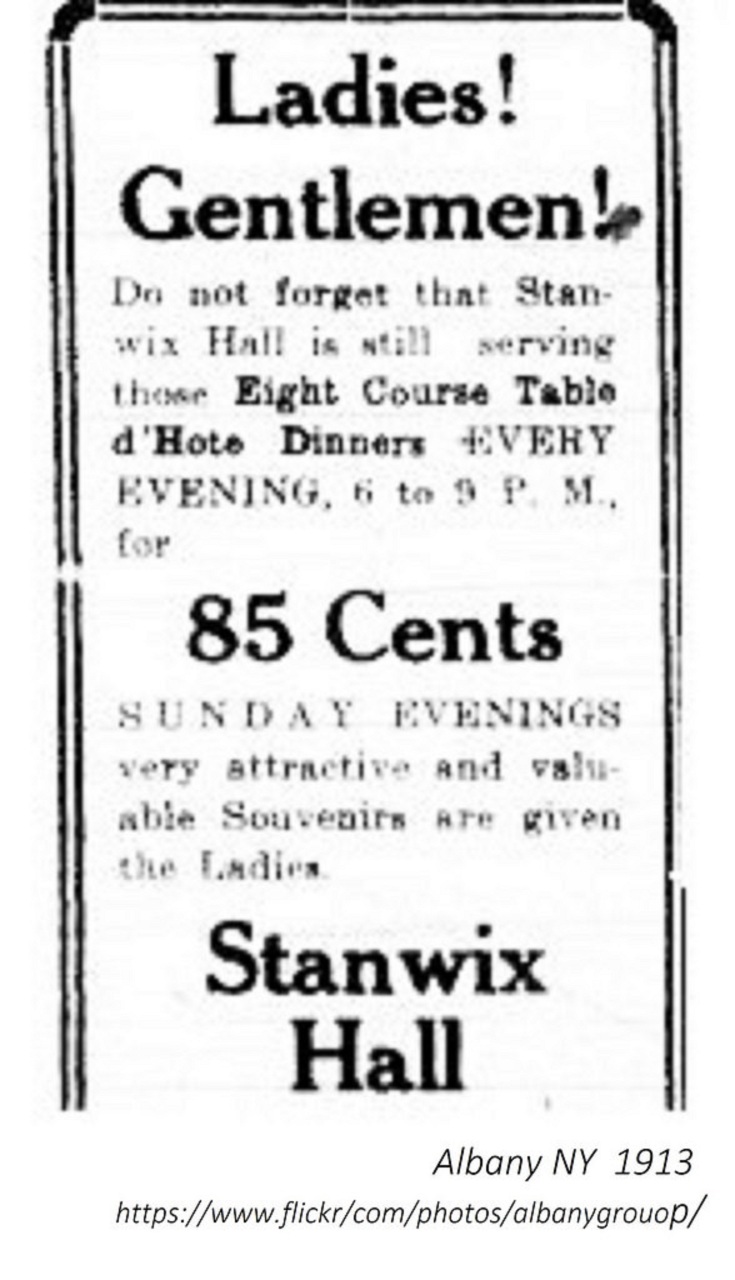 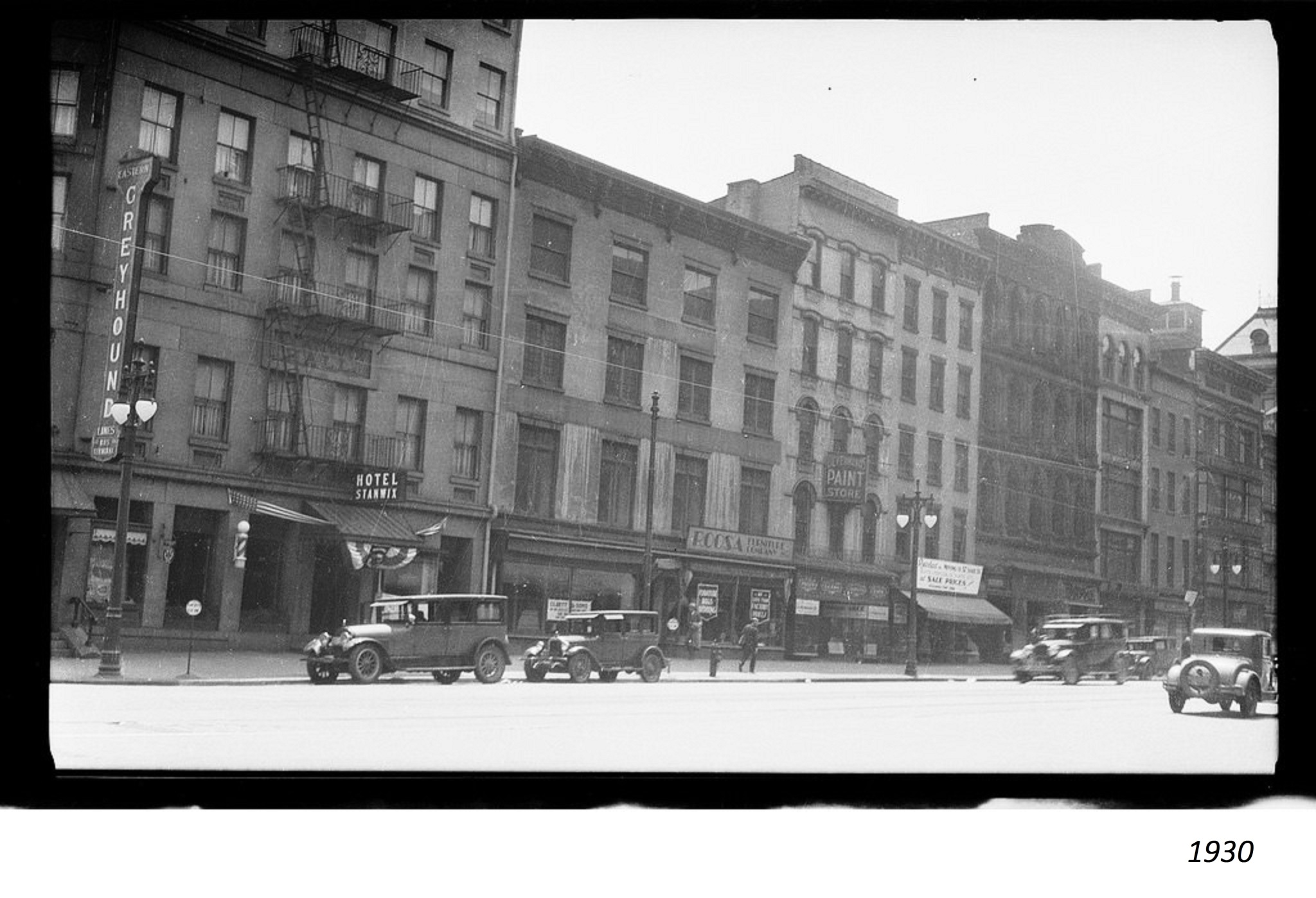 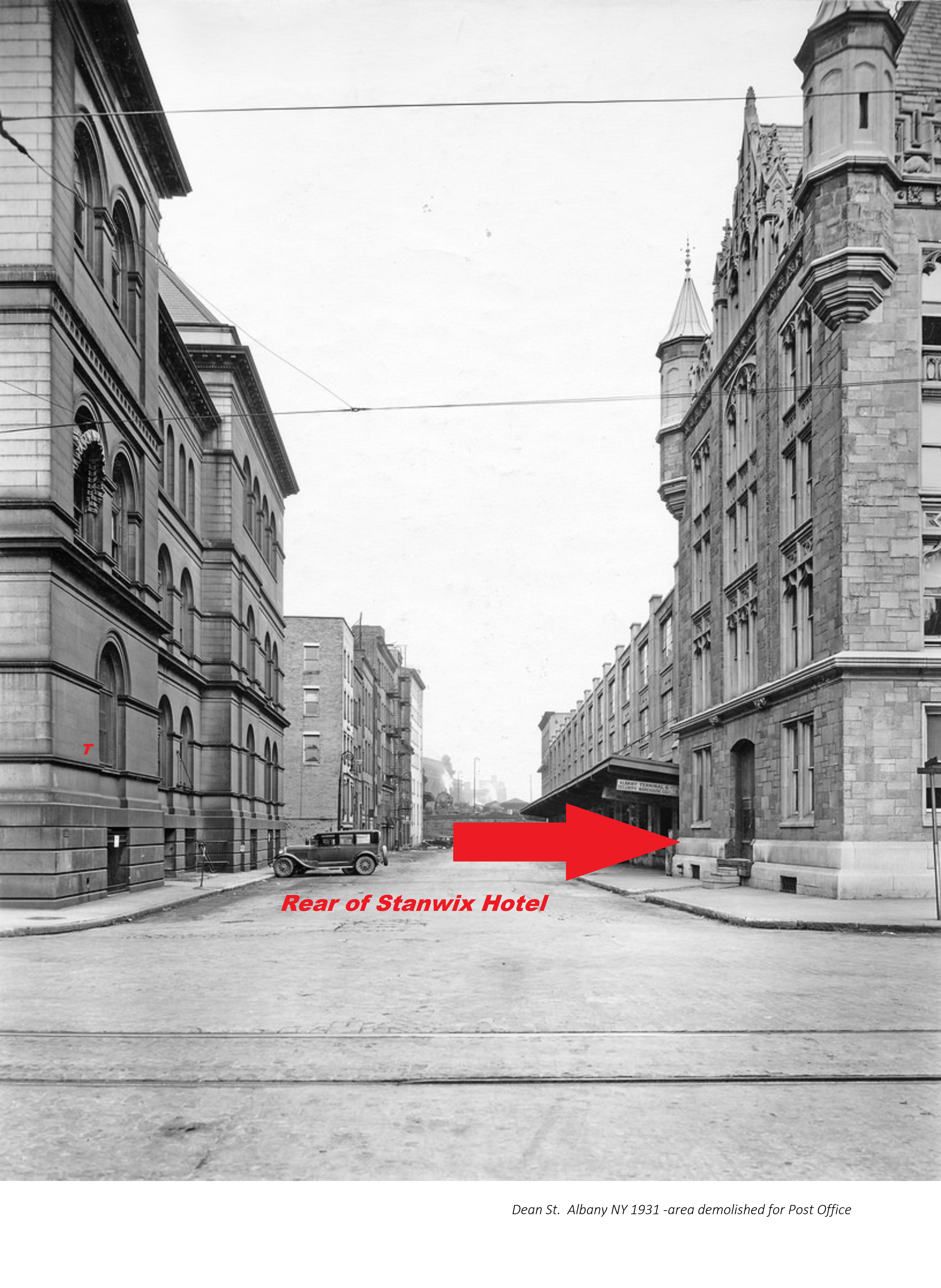 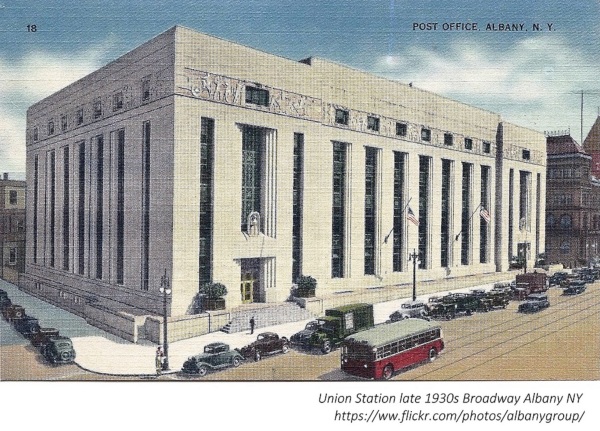 In 1933, a hundred years after it was built,  the hotel was razed to make way for a new federal building and post office. (It’s now the Foley Courthouse.) In the basement of the present building, at the end of the corridor, is a small piece of stone and a plaque inscribed, “This stone was salvaged from the debris of Stanwix Hall and placed here, the exact location where it originally rested in its former home.” 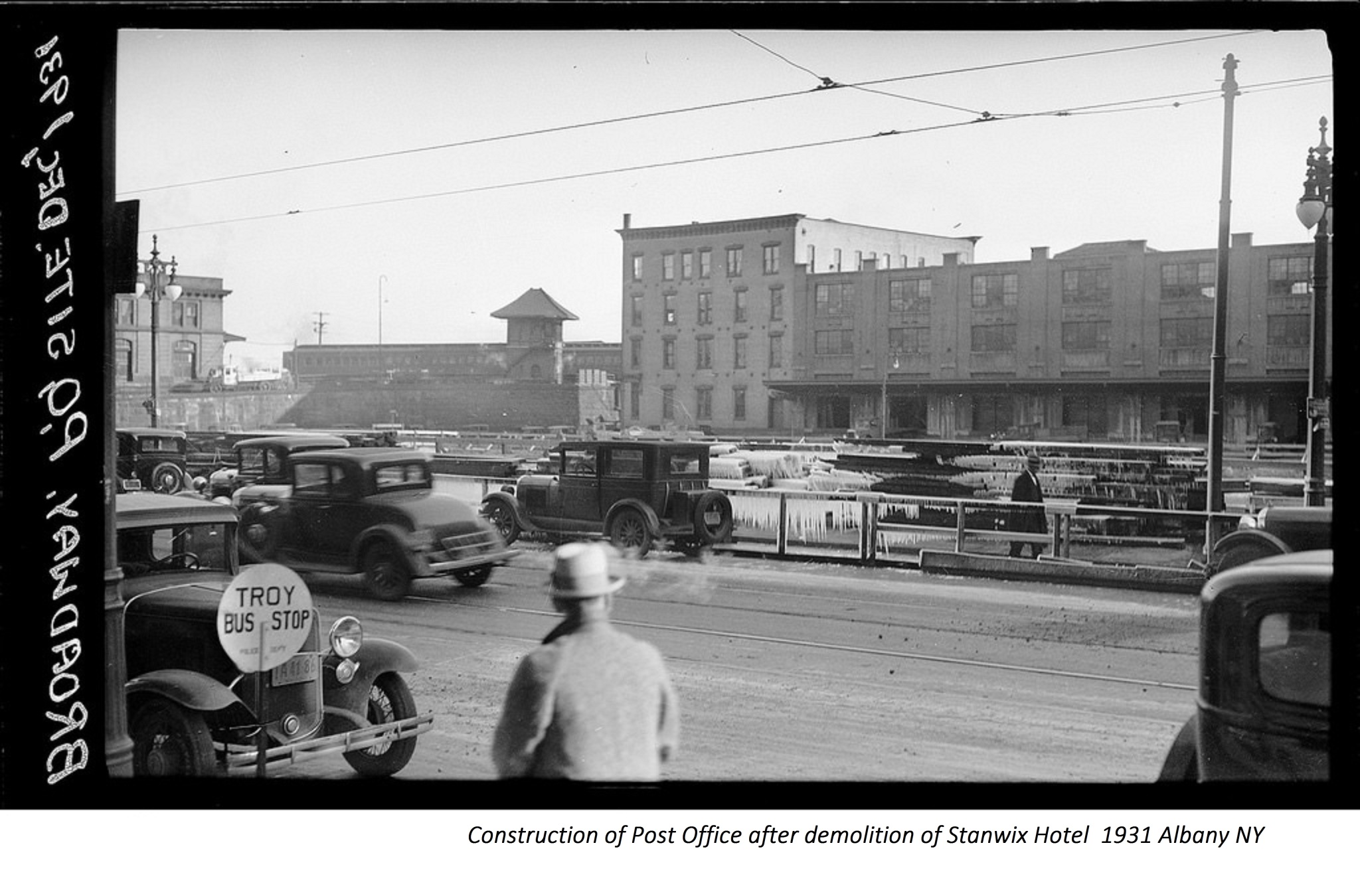 * Peter Gansevoort also had a daughter Maria who was the mother of Herman Melville. While a teen in the late 1830s Melville was president of an Albany debate club that held its meetings in the Stanwix.

** The first time the Stars and Stripes ever flew in battle was over Fort Stanwix.  It was made from red flannel petticoats from officer’s wives and the blue coat of a soldier from Duchesss County