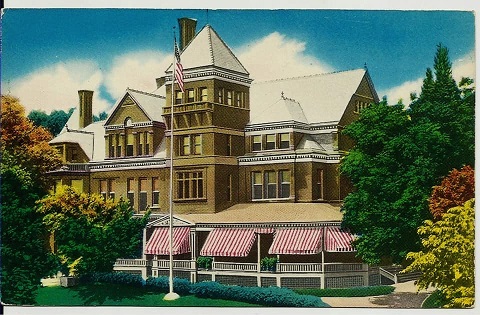 It was built in the 1850s by Thomas Olcott, one of the wealthiest men in Albany, on what was the edge of the residential part of city at that time.

In 1875 it was leased to new Governor Samuel Tilden and then purchased by NYS to serve as the official Governor’s residence. (Before that Governors simply lived in their own houses or leased properties during their term.)

The Mansion has been renovated many times over the years. Teddy Roosevelt needed to accommodate his large family. 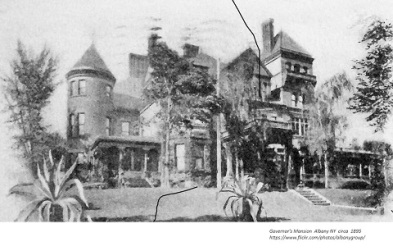 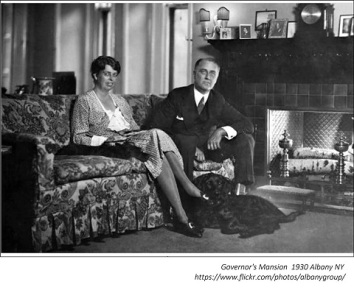 The Roosevelts by the Mansion fireside 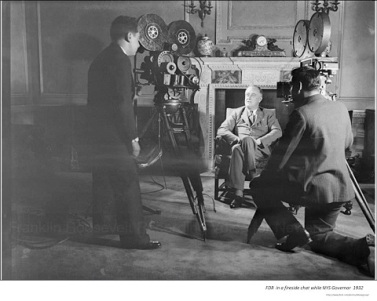 During Governor Lehman’s administration, following FDR, Mrs. Lehman did a bit of sprucing up (Eleanor Roosevelt was NOT an interior decorating sort.) 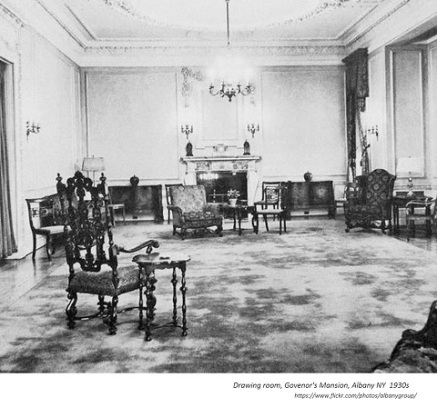 Governor Dewey and wife eat soybeans for the war effort.

In 1961 a fire ripped through the Mansion while Rockefeller was governor, and it was completely re-done. 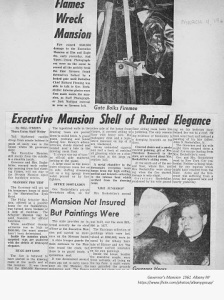 Governor Rockefeller at a holiday staff party  circa  1970. 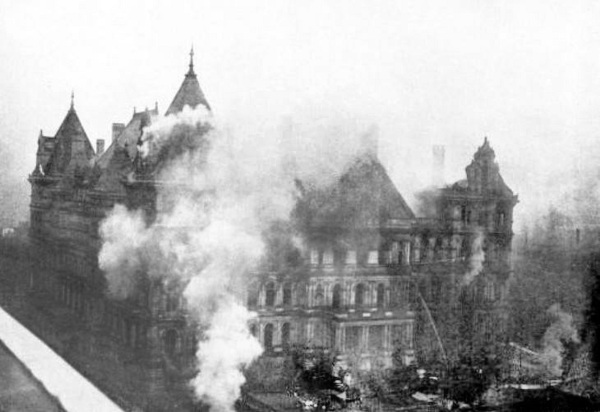 On March 29, 1911, the Great Fire destroyed the west wing of the Capitol, wiping out the Assembly Chamber, other offices in that wing, and most importantly, hundreds of thousands of documents in the State Library; the history of New York State and Albany up in flames.

The first fire alarm was pulled at Fire Box 324 at about 3:30am on the corner of Washington Ave, and Hawk St. Within 5 minutes fire crews reached the building but parts were already engulfed. 150 firemen and 10 engines were deployed, as were the Fire Protectives (a fire salvage crew paid by city insurance companies) and almost all city policemen. Then the 10th NY National Guard based out of the Washington Ave armory arrived.

Firemen battled the fire in shifts; just when they thought they had beaten it, smoldering embers in another area would come to life. (Fire apparatus was not removed for another 2 weeks, just in case.) When men on the line started to weaken or were hit with flying shards of marble or granite, others stepped up to fill their spot and give their brothers respite. (In 1911 a great uncle was a tillerman from Hook and Ladder 3 – Clinton and Ontario, and at 6’ 5”, reputedly the most able axe man in the city.) Despite Fire Chief Bridgeford’s determination that the fire was contained by mid-morning, it was another 24 hours or so until it was fully extinguished.

Thousands of spectators gathered in the street; police duty shifted to holding back the crowd. The effect of the fire on the people of Albany was profound. First there was disbelief. That a building that looked like a fortress could have burned so badly was incomprehensible. They’d been told it was “absolutely fireproof”. There were few in the City who didn’t have a connection to the Capitol. It was built with the blood and sweat and backs of hundreds of stone cutters, masons, carpenters and laborers who had come to Albany to build the Capitol and the city had become their home. Hundreds of people worked in the Capitol; it housed most NYS offices.- it was their work “home”. Many of the firemen and police were from the South End and Arbor Hill; for most, when the Capitol was under construction it had been their playground as they dodged construction foremen. The destruction of Albany’s architectural pride devastated the city.

For years people talked about fire and the bravery of the firemen. But one of the stories that was passed down to me was about “saving the library.” Flames and smoke shot through the State Library and its treasures. An heroic effort saved some. The only extant copy of Lincoln’s Emancipation Proclamation of 1862 in Lincoln’s own hand was saved by Harlan Horner of the State Teacher’s College. Notified shortly after the fire broke out, he dashed to the Capitol, and put as much as he could in a large basket. About 30 basketfuls were saved, including royal charters, Major Andre’s pass from the Revolutionary War, wampum belts from the 1600s, George Washington’s survey equipment and a draft of his farewell address from 1796. But hundreds of thousands of documents were lost, including the papers of Governor Dewitt Clinton and Dutch documents from the earliest days of Rensselaerwyck and New Amsterdam.

Papers and documents littered the streets and swirled for a 6 mile radius. As it was told to me, somehow the children of Albany got the idea that the papers were all from the Library and were “Albany’s history”. Less than 18 months prior the city had celebrated the 300th anniversary of Hudson’s sail to Albany in 1609; these kids knew their history and were determined to save it. They set about picking up every stray paper they could find to save “Albany history” from the Library for weeks. They scoured streets and parks and some braved roof tops. I was told that, in retrospect, most of what they found and turned into their teachers were actuarial tables, or bill drafts or expense accountings, but every now and then they did find a fragment of history. 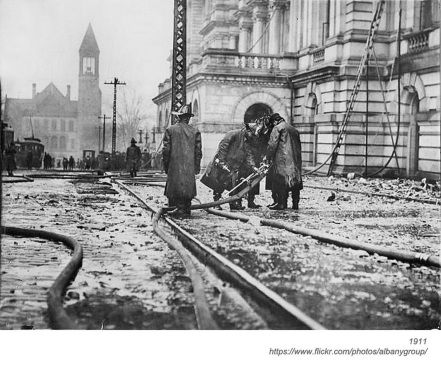