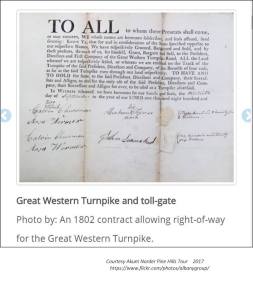 Chartered in 1799, the Great Western Turnpike Company was largely responsible for the development of Western Avenue (and Route 20 out to Cherry Valley). The road – crudely graded and planked – opened for public use in 1804. A series of tollgates provided access and generated income.

The first of these was built across the road near what are now Winthrop and Marion Avenues.

Privately-held toll roads surrounded Albany city and were big business, controlling land access from anywhere outside city limits. The first crack in their stranglehold on transportation came with the advent of railroads in the 1830’s. As rail travel grew, the profits of the toll highways began to shrink; stagecoach transportation was on its way out.

The Great Western Turnpike crumbled in sections, the westernmost portion becoming a public road in 1853. Ten years later, the tolls were lifted west of the fifteen-mile point. In 1871, six more miles were freed. All that remained after that was the nine-mile strip connecting Albany and Guilderland.

Over the next 25 years, most of the toll road companies in the area folded, and the city of Albany began an ambitious program of improving its existing roads and paving new ones.

The city, meanwhile, had grown steadily westward. Former farmlands west of Manning Boulevard were subdivided into building plots; new side streets popped up. Among the first was Nineteenth Street, now Winthrop Avenue.

Despite being ungraded, sandy, and nearly impassable, Nineteenth Street had one popular attribute: it was just west of the Great Western Turnpike’s Western Avenue tollgate. While farmers continued to pay tolls, casual travelers and pleasure seekers braved treacherous Nineteenth Street to circumvent the tollgate.

The Turnpike Company fought back in 1897 by piling a large barrier of lumber across Nineteenth Street at Western Avenue. This started a brief but nasty “Toll Gate War” with the City. Albany’s Common Council ordered the company to remove the obstruction. They did, but replaced it with a new, annex tollgate. The City gave them 48 hours to remove it, which they did not, so the new gate was promptly destroyed by order of the Street Commissioner.

The GWTC’s lawyer claimed its charter predated the existence of the Common Council (which it did), and that the destroyed annex gate was on their property (which it was). The City responded that the Company had no right to blockade a city street. The Company did not rebuilt its annex gate, but posted a toll collector at the intersection; most rode past him without paying, and there were no means of enforcing the toll.

Soon thereafter, the City cobbled together a resolution mandating unimpeded access to Western Avenue from Nineteenth Street, Brevator Street, Magazine Street, and all other side streets.

No longer so great, the Great Western Turnpike Company fell on hard times, its revenue vanishing, its equipment in ruins. In 1899 its stockholders met and ejected the entire board of directors.

By 1906, the City had had enough. The Common Council issued an ordinance authorizing the extension of Western Avenue to the city line, “making a part thereof, the highway now owned by the Great Western Turnpike Company.” The Commissioner of Public Works earmarked $4000 in compensation.

Balking at this deal, the Turnpike Company sold its remaining tract to Abel I. Culver, Vice President of the D&H Railroad and the United Traction Company, for $12,000. The property – nine miles long and 99 feet wide – was nominally a personal (non-business) purchase, but it was actually all about business. As soon as the shrewd businessman gained possession, he deeded the eastern two miles to the City of Albany, and the remaining seven miles to the county. In both cases, he gifted only 66 feet in width, keeping the remaining 33 feet for the future construction of a suburban trolley line. Culver was praised for his generosity, gifting the City something for which they were about to pay $4000, while establishing the right of way for what would become a highly profitable venture.

Tolls for the use of Western Avenue ceased at midnight on Saturday, April 21, 1906. The following day, the last tollgate of the Great Western Turnpike Company was razed.