We’ve been taking a deep dive into the African American population in Albany in the 1800s, to try to get a sense of what their lives were like before the Civil War -the defining event of the century., and after.
One couple, Michael and Susan Douge, stands out for their dedication for decades – to their community and to the causes of abolition before the Civil War and equal rights after the War. They were perhaps the most influential couple in Albany’s African American community during the 19th century.
Michael was born in New Yok City in 1804, son of a freeman. There is some evidence that his father had been enslaved in Haiti, but made his way New York after the slave revolt in the 1790s. Susan was born in Albany; we know little of her origin story. Census data indicate her mother, Mercy Franks, was born in Dutchess County in the 1780s; she’s identified as a free woman in the 1820 Albany census. She may have been married to John Franks  who appears in the 1833  city directory.  By 1844  Mercy is identified as a widow. The Franks may have once been enslaved by the Franks family in the Hudson Valley who were slave importers and sellers for several generations.

In 1827 the Freedom’s Journal, the first African American newspaper in America (published in New York City) carried the wedding announcement of Michael Douge (New York City) and Susan Ames (Albany) on April 25, 1827 . The ceremony was performed by Rev. John Chester of Albany’s Second Presbyterian Church.
In 1830 Michael is identified as a hair dresser, living and working at 14. South Pearl, close to State St.
By the time Michael was in his late 20s he became publicly involved in Albany’s African American community. In 1831 the Albany African Clarkson Society (Thomas Clarkson was an Englishman who campaigned vehemently against the slave trade) held a major event, including a procession, accompanied by music through the streets celebrating the 4th anniversary of the abolition of slavery in New York State; Michael Douge gave the major address.
Throughout the 1830s he continued his involvement. He writes letters to  The Liberator the anti-slavery newspaper published by William Lloyd Garrison. He was one of the founders of the Philomethean Society, a Black literary association in 1835, (modeled after a similar society in New York City); an officer in the “Colored Person Union” of Capital District (est. 1837) dedicated to moral improvement and education of the Black population, and active in a group vehemently opposed to African American colonization in Liberia and elsewhere, outside of the United States.
Both Michael and Susan were active in establishing the African Methodist Episcopal Church in Albany.
In 1833 Susan was one of the founding members of the Female Lundy Society. (The Society was named after Benjamin Lundy, a white abolitionist who published the newspaper “The Genius of Universal Emancipation”);it was dedicated to charitable works in the African community and anti-slavery activities.) In 1837 she was also part of the group of Black women that established Albany’s Female Lovejoy Society. (Elijah Lovejoy was a white abolitionist and newspaper publisher murdered in Ohio in 1837 for his anti-slavery views. His murder shocked the nation.)
In 1840 Michael was an attendee of first New York State Convention of Colored Citizens , which happened to be held in Albany. The same year he was part of a group of men who lobbied to establish a publicly-funded school for Black children as the city had done for white children. Ultimately they was successful and by the mid-1840s the Douge’s daughter Catherine Mary was a teaching assistant at the segregated Wilberforce School for African American children. (Although records indicate that the Douge children, along with children of some other African families may have been allowed to attend white schools.) 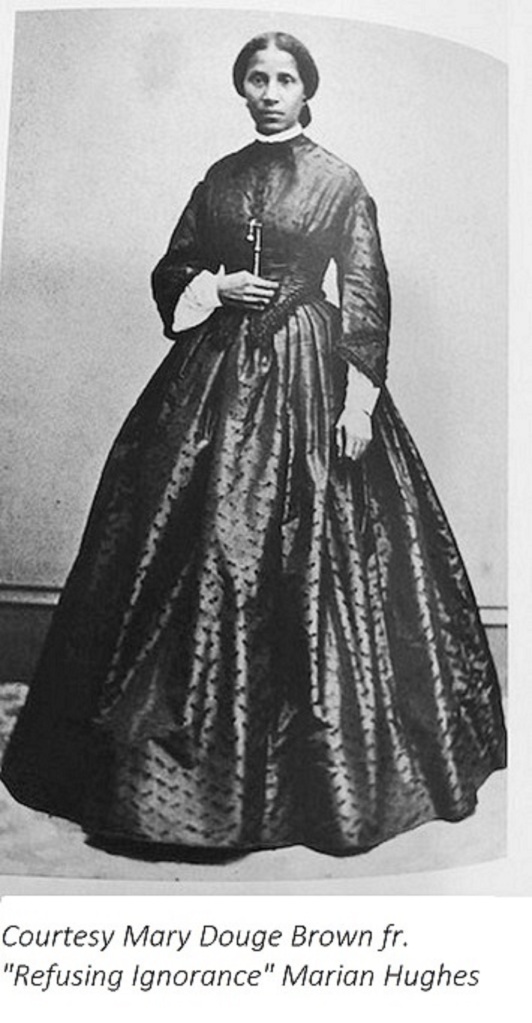 In 1843 he was part of a group of men, including, Rev. Benjamin Paul (one of the founders of the Black Wilberforce Colony in Canada), Thomas Paul (the noted teacher in Albany and Boston and one time William Lloyd Garrison printing apprentice),  and Benjamin Lattimore and William Topp (active members of the Underground Railroad in Albany) who presented an address to Governor William Seward, thanking him for what he had done for the Black community. (Seward would go on to be a U.S. Senator from New York State and Lincoln’s Secretary of State.)
During the 1830s and 1840s the Douges were busy raising their children – (Catherine) Mary, (Susan) Cornelia, Francis, Julius , and John. Michael’s barbershop seems to have thrived. In early Albany city directories they’re listed various as living at 14 South Pearl St., just in from State St. Through the 1830s and early 1840s they remain in the South End, living in in various locations on South Pearl St.
At one point in the mid-1830s the Douges lived at 9 Plain St,, owned by Benjamin Lattimore, Jr. Lattimore was one of the first Albany men to attend Colored Conventions (the first national expressions of abolition and political equality for African Americans). He was a friend of William Lloyd Garrison, and anyone of consequence in the early days of the anti-slavery and political equality movements in the 1830s. It’s safe to assume that through him and others the Douge family shared similar linkages to the world outside Albany. These would come to include Frederick Douglass, who had close ties to many white and Black abolitionists in the city.
By the mid-1840s the Douges moved to 100 Franklin St,. where they remained for a number of years.
While teaching the Wilberforce School Mary married the principal Henry Hicks. Sadly Henry died only a few years after the marriage; in 1855 Mary is identified as living with her parents and her two small children, along with her younger brothers.
Abolition is a Douge family affair. When Mary was just 17 she became a subscriber to Frederick Douglass’ Northstar newspaper. (In 1853 Michael and other local prominent African American abolitionists gathered at the A.M.E church to endorse the Frederick Douglass Paper\ the successor to the Northstar.)
By the mid-1850s the Douge sons had assumed the role held by their father. and were participating in the Colored Conventions and delegate selection for Frederick Douglass’ nascent National Council for Colored People.
After the Civil War Mary went south to teach freed Blacks under the auspices of the Freedman’s Bureau while her parents raised her children. Susan continued her activities with the Female Lundy and Lovejoy Societies.
Michael appears to have been slowing down, but he did play a role, along with his sons Julius and John in Black Republican politics in the city. Julius was also one of a about a dozen prominent African American men in the city who lobbied the Board of Education to permit Black children to attend local (white) public schools, and to admit Black children to the Free Academy (High School) over a number of years (In 1873 they were successful.)
Julius was cut from the same mold as his father, and was soon a member of the African American Masonic Lodge and the Black chapter of the Oddfellows The Douge men were members of the Charles Sumner Association – a mutual aid society for African Americans in Albany (its motto was “ We care for our sick and bury our dead”), as well as the Burdett-Couts Benevolent Association.
But the battle for equal rights was not over. Mary Douge Williams stepped up for women’s suffrage, and became a vice president of the newly formed Albany Woman’s Suffrage Association in 1880. There is a wonderful description in a suffrage newspaper of very dignified Mary leading a contingent of African American women, including her mother Susan, then in her late 70s, to register in Arbor Hill (where the Douges were now living at 25 Lark St.) and vote in the School election of 1880. (This was the first time New York State allowed women to vote.) We know that Mary and Susan voted in subsequent years.
Then tragedy struck. Michael died at the age of 79 in late 1883 and Mary, at age 51, less than six months later in 1884. (Their children Cornelia and Francis had both passed in 1859.)
But Susan continued to play an active role in her community as a member and sometimes officer of both the Lundy and Lovejoy Societies until she died in 1897 at the age of 92. She would live to see her grandson Robert Douge become only the second Black man to graduate from Albany Law School in 1890.

Michael and Susan Douge and other family members are buried in Lot 3 Section 99 of Albany Rural Cemetery.