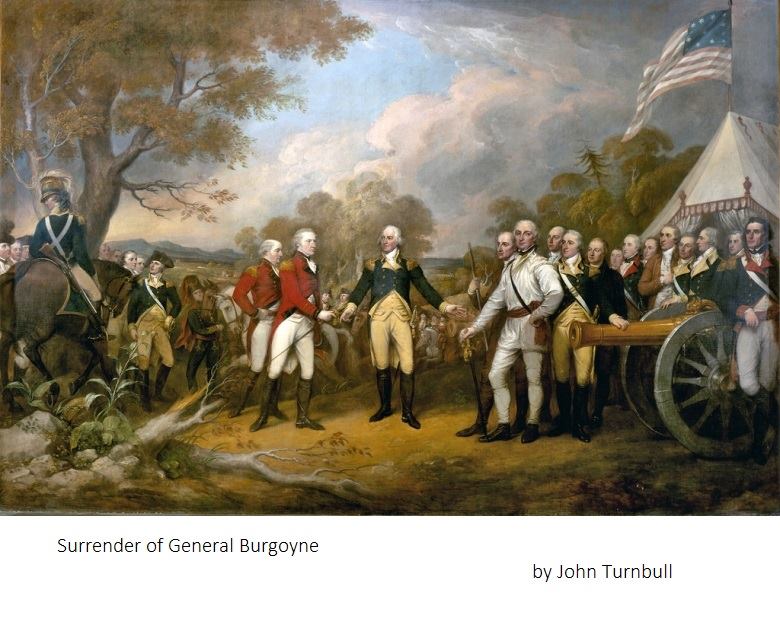 On October 18, 1777 General Burgoyne (“Gentleman Johnny”), the British commander at the Battle of Saratoga, surrendered to the American General, Horatio Gates. Approximately 5,800 troops were taken prisoner, mostly British and Hessians. The Hessians were mercenaries- soldiers from the German State of Hesse-Cassel, furnished to the British for the American war under a financial agreement between with the Landgrave (sort of the Prince) of Hesse-Cassel) and the English government.

This was the turning point of the Revolutionary War, since the defeat of a massive British invasion force not only buoyed the confidence of the patriots, but was such a resounding victory it convinced the French they should assist the Americans and come to our aid. This proved to be a critical factor in our ability to win the War. 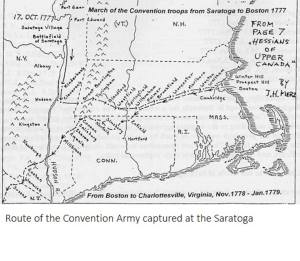 On the same day about 5,000 British and German troops set off for Boston where they were to be held as prisoners of war. They became known as the “Convention Army” – based on the conventions (terms) of the surrender. They marched south to Kinderhook, bypassing Albany, and then east to Massachusetts. There are many stories about British and Hessian soldiers falling out of line along the route of march and becoming part of the population of Columbia County (where there was a large Palatine German population) and along what is Route 20 in Massachusetts today. (America has a rich and diverse gene pool.)

About 500 sick and wounded British and Hessian soldiers were transported to Albany to the colonial hospital (at about where Pine and Lodge streets intersect today). Even 4-5 months later, in March 1778 when the Marquis de Lafayette arrived in Albany, there were still British soldiers under care in Albany. 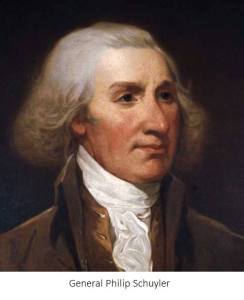 After the surrender General Schuyler offered the hospitality of his Albany home to General Burgoyne and Baron von Riedesel (commander of the Hessian troops), as well as the Baroness and their 3 children who had accompanied him into the fight (The Baroness was quite astonished at such kindness, since British troops had burned Schuyler’s Saratoga home to the ground during the Battle). They left Saratoga on the 17th of October under a guard of 200 men led by Colonel Quackenbush and after 2 days reached Albany.

General Burgoyne (more than a bit of a bon vivant) enjoyed his stay at the Schuyler Mansion after his long trek though the wilderness from Canada and was impressed by General Schuyler’s wine cellar and the graciousness and geniality of the General and Mrs. Schuyler. Some even say that the charms of General Schuyler’s daughter Eliza, who would later marry Alexander Hamilton, caught the eye of the well-known playboy and sophisticate. Accounts vary on the length of his stay; it could have been as short as several days or as long as fortnight before he was on his way to Boston along with the Baron. The Baroness remained longer at the Mansion and departed with her children around the end of October. 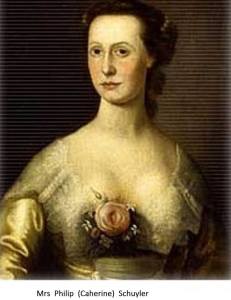 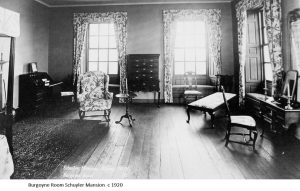 Note: there is a plaque at SUNY Plaza, State and Broadway, marking the spot where Burgoyne made his entrance into Albany. 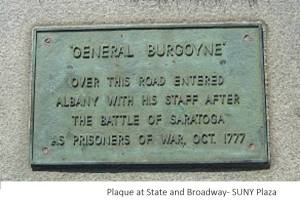 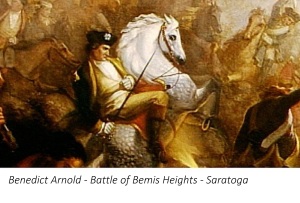 Today, October 7, 1777 the Battle of Saratoga, which began on September 19th, ended. British General John Burgoyne made a last desperate attack on Bemis Heights. Disobeying a direct order from the commanding general, Horatio Gates, General Benedict Arnold flung himself into the fray, leading patriot troops against pockets of British attackers and exploiting weaknesses in British defenses. One soldier said “he was the very genius of war”.

During one of the last attacks, Arnold was shot in the leg and fell, pinned beneath his horse.

The Americans won the battle, called the “turning point of the Revolution”. Burgoyne retreated, surrendering 10 days later. Benedict Arnold’s fighting days were over. His leg had been shattered by a musket ball. Arnold, along with 1,000 other American, British and German wounded, was sent to the military hospital in Albany. (By tradition, Arnold is reputed to have been transported initially to a house in Kinderhook after the Battle – but he ended up in Albany hospital.) 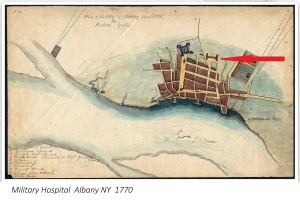 The hospital was constructed during the French and Indian War in the 1750s. It was located down the hill from Fort Frederick, overlooking the City at what is now the intersection of Lodge and Pine Streets. In 1776 it was refitted as one of 11 major military hospitals during the Revolution.

(Once upon a time there was an historical marker identifying the location; that has disappeared.) 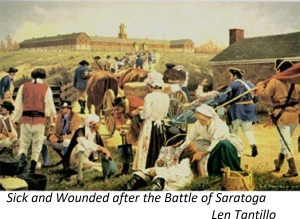 It was a large building, constructed in an H configuration; with 2 stories, and 40 small wards (to enable quarantine from infectious disease) and able to accommodate 500 patients. After the Battle of Saratoga, the hospital was so crowded that provisions were made to locate patients in the Dutch Church at the intersection of State and Broadway. The Albany Committee for Safety also commandeered several private residences. About 60% of the patients were British and German; they were accompanied by their own physicians and surgeons.

Arnold was not a “good patient”. Surgeons wanted to amputate his leg to save his life. He refused. Contemporary descriptions from hospital doctors describe him as petulant and peevish. He was encased in the equivalent of wooden box; immobilized. Finally in January 1778 he was sufficiently recuperated to be able to sit up in bed and write letters. He would remain in the hospital until late February or early March.

Those 5 months gave Arnold time to think. From his hospital bed he learned that most of the credit for the victory at Saratoga was going to “Granny” Gates, notorious for his excellent organizational skills, but thought by many to be a man of little personal courage and deficient in battlefield tactical skills.

Arnold’s Revolutionary War career had already been full of ups and down – the capture of Ticonderoga with Ethan Allen (Allen received most of the credit); an extended campaign in Canada, during which he was promoted, shot in the leg (yes, the same leg) to brigadier general, then replaced and finally forced to retreat from his occupation of Montreal; a rout in the Battle of Lake Champlain (that did serve to delay the British drive south to Albany until the following year), and shot again in the leg (yes, that leg) in the Battle of Ridgefield, Ct. He was passed over for promotion by the Continental Congress several times and accused of corruption and malfeasance by fellow officer. He finally submitted his resignation which was refused by Washington, who then dispatched him to upstate New York.

As he lay in the Albany Hospital, abusing phycians, orderlies and everyone in sight, we see a really angry man with more than ample time to think about his life. He was 36, a widower with 3 sons. He was a man of action and a natural warrior whose fighting career was over. He had thrown himself into the War and his business had suffered. A doctor who treated him after his initial leg wound in Canada less than two years before noted that Arnold, while in the Albany military hospital, seemed to be a different man – now dissatisfied, disgruntled and truculent. Several visitors note the same; it is quite probable that those long months during a cold and bleak Albany winter provided a time for reflection and set the stage for the perfidy that was to come.

By the time Arnold left Albany for his home in Connecticut, the Albany hospital had few patients. The Marquis de Lafayette had spent the month of February, 1778 in Albany. During that time he made arrangements for the remaining British and German patients and their physicians to be transferred to General Howe in New York City. In early June, the hospital closed. The War in upstate New York was mostly over and the hospital was no longer needed. The last patients and staff were transferred by sloop down the Hudson to another hospital near West Point.

The Hospital itself seems to disappear by the end of the War. We surmise land became too valuable and it was demolished and the land sold .