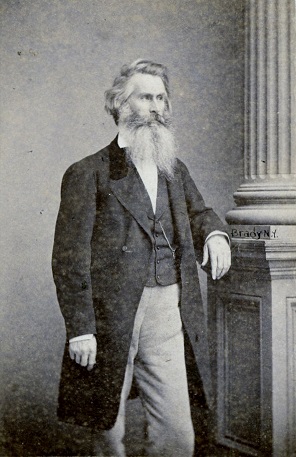 Palmer was born in 1817. He was a self-taught artist who showed early talent by carving wooden animals on his father’s farm in Pompey, N.Y.
As a young man, he moved to East Aurora (near Buffalo) to work as a carpenter.  While living in East Aurora, he married, but illness claimed both his wife and infant son.  Shortly after this double loss, he relocated to Utica where he continued as a carpenter and woodcarver.  In 1843, he married Mary Jane Seaman.
Having seen illustrations of cameos in the home of a client, Palmer was inspired to cut a cameo of his wife using an oyster shell and the smallest of his carpentry tools.  He showed the finished piece to a local lawyer for whom Palmer had done work.  The lawyer was very impressed by Palmer’s work and immediately lent him books with engravings of famous artwork, provided him with letters of recommendation to a number of prominent artists of the era, and strongly encouraged Palmer to pursue a career as a sculptor.
That career began with a series of portrait cameos, mainly of prominent Utica residents.  However, Palmer found that working on such a small scale was straining his eyesight.  He began producing larger reliefs in marble.  One early work is the allegory of Faith which hangs in St. Peter’s Episcopal Church in downtown Albany. He then progressed to
larger marble works and, later, some bronzes sculptures such as the figure of Robert Livingston which represents New York State in Statuary Hall at the U.S. Capitol.
Palmer relocated to Albany early in his artistic career, maintaining a home and studio first on Columbia Place and, later, on Lafeyette Street. He also kept a farm in Glenmont.
There is a curious tale told about Palmer’s passing and a final visit to his closest friend, the painter Asa Twitchell. The following was written by Anna Parker Pruyn on the reverse of a ca. 1900 photo of Palmer and Twitchell seated in the gallery of Lawson Annesley:

“Mr. Palmer died first. Mr. Twitchell lived out on N. Scotland Rd. and had no telephone. Mr. Annesley drove out to break the news to him, but Mr. Twitchell said he already knew it. ‘He came out 9 this morning – stood by his bedside and said “I- I’m going – I have come to say goodbye to you.'”

Palmer died at the age of eighty-six on March 9, 1904 and was buried in the Albany Rural Cemetery in Lot 15, Section 34. His monument was the work of Marcus T. Reynolds and the sides incorporate the marble reliefs of “Dawn” and “Evening” by Palmer. Palmer had a long history with the Cemetery. Not only did he create some of its finest monuments (including the Angel At The Sepulchre).  He also served as one of its Trustees. 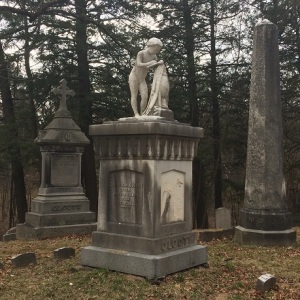