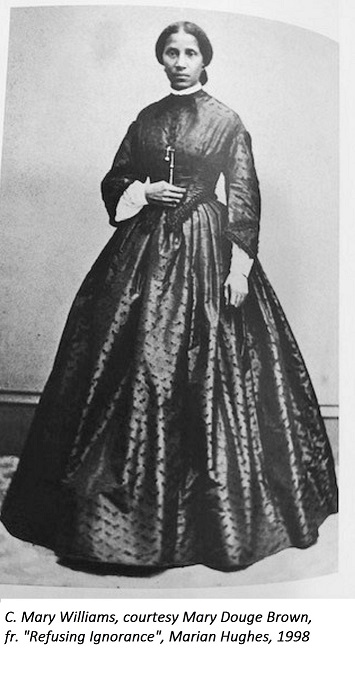 Mary Williams was born Catherine Mary Douge in Albany in the 1830s to Susan and Michael Douge. Michael was born in Albany around 1800. More research is needed, but we think his father may have been part of the slave revolt in Haiti in the 1790s.

By the 1830s Michael and Susan were leaders of the African community in Albany. Michael was a barber, and through newspaper accounts of the time we can see that he was in the middle of everything that affected the community socially and politically; advocating tirelessly for the rights of his people. Meanwhile Susan was organizing the Female Lundy Society, the first African-American women’s charitable organization in the city. They were both deeply involved in support of the African M.E. Church.

In the early 1840s we find the family living on Plain St. in Albany in a building owned by Benjamin Lattimore. Lattimore was one of the first Albany men to attend the earliest Colored Conventions (the first national expressions of abolition and political equality free Blacks in the U.S.). Lattimore was a friend of Frederick Douglass, William Lloyd Garrison and anyone of consequence in those movements.) So it’s safe to assume that Douge family had similar linkages to the world outside Albany.

In 1847 Mary became an assistant teacher in the segregated Wilberforce School for African children in Albany. It was here she would meet her first husband, Henry Hicks, who was at one point principal of the school. Although Henry died in 1853 Mary would teach at Wilberforce for another 6 years or so.

We lose track of Mary until after the Civil War. Despite the fact that appears to have been suffering from TB she ventured south to Virginia and South Carolina to teach children and adults recently freed from enslavement. She would have taught under the auspices of the Freedmen’s Bureau. (One of the assistant commissioners of the Bureau, J. Sella Martin, was the husband of her childhood friend Sarah Lattimore. )

While in South Carolina Mary met her second husband, Andrew Williams, and the couple returned to Albany.

In 1880 we find the couple and their daughter Susie living with Mary’s parents at 25 Lark St.*In that year the New York State Legislature enacted a law permitting women in New York to vote in school elections. This is known as the “School Suffrage” law. Lillian Devereux Blake, the president of the New York State Women’s Suffrage Association had lobbied tirelessly for the law. She and others used it as a catalyst to establish women’s suffrage societies around the state. The first meeting of the Albany group was held in March, 1880.

The immediate goal of the women was to get the word out about the School Suffrage and get women registered to vote in the school commissioner election on April 15 . Mary was in the thick of it. We can only depend on spotty newspaper accounts of the time, but at least 6 African-American women from Arbor Hill voted. (We suspect there were more.) They included Mary, her mother and Julia Myers, daughter in law of Stephen Myers, superintendent of Albany’s Underground Railroad.

Mary was committed to women’s political equality. She would become the Vice President of the Society, and remain in that position for at least 2 years (she and her mother voted in 1882).

The importance of Mary’s participation in the Society as an officer can’t be underestimated. It tells us that Albany’s women suffrage activities at that time included women of color, unlike other areas of the country. It’s quite possible that she may have been influenced through her family’s personal connections to Douglass, who was one of the only 2 Black men to sign the “Declaration of Sentiments” at the Seneca Falls Convention in 1848 advocating political equality for women. Or even Susan B.Anthony herself who had close personal connections with members of the African American anti-slavery and temperance community in Albany for decades.

It speaks to Mary’s significance in Albany, both in the White and African American communities, and the esteem in which she was held. Mary died in 1884. In her death notice it refers prominently to her membership in the Suffrage Society. That mention makes us think that she was proud of her role in the political equality movement for women, and she understood its importance. Her father was afforded full voting rights in 1870 with the passage of the 15th amendment. Yet she and her mother and other women who had worked tirelessly to improve their world would be denied that right for another 50 years until the passage of the 19th amendment. We suspect that reactions ranged from grave disappointment to outright fury.