Stewart Dean was born in Maryland in 1748. It’s said he learned to sail off the coast of Maryland and captained his first ship while still in his teens. For reasons unknown he came to Albany in the late 1760s or early 1770s and quickly became a respected member of the community.

In 1773 he married Albany native Pieterje Bradt (a/k/a Bratt), daughter of a shipwright. He captained ships up and down the Hudson River and into the West Indies. In 1775 Dean and Abraham Eights, a sailmaker, own property next to one another on Dock St. along the River. (Eights was several years older than Dean, the son of a captain from NYC, who settled in Albany around the same time as Dean and it appears they became fast friends.) 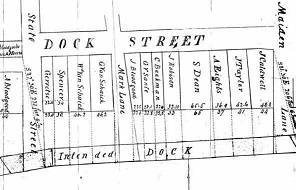 In June 1776 Dean received a “letter of marque” from the Continental Congress. This commissioned Dean and his sloop the “Beaver” (90 tons, 6 cannon, 25 men) to act as a privateer. (Basically, this was a license to fit out an armed vessel, use it in the capture of enemy merchant shipping, and to commit acts which would otherwise have constituted piracy.) Within 3 months the “Beaver” and the brigantine “Enterprise” captured a prize,the “Earl of Errol” en-route from Jamaica to London. The “Earl” was taken to Boston where it was sold along with its cargo of sugar, cotton and rum. The investors who owned the “Beaver” sold it as well.

Dean returned to Albany where he and his friend Abraham enlisted in the first regiment of the Albany County Militia. Over the next 4 years they would participate in a number of campaigns, including the Battle of Oriskany, in the Mohawk Valley and the Battle of Saratoga.

Dean would become a member of the Albany Committee of Correspondence (the city’s governing body during the War) and its successor, the Committee for Detecting and Defeating Conspiracies (which may be my favorite organization name ever). By 1781 life in Albany had begun to return to a degree of normalcy although the War was not over (it wouldn’t end until 1783 with the Treaty of Paris). But life was apparently too dull for Dean.

In 1782 he was again commissioned as a privateer, on the schooner “Nimrod” (90 tons, outfitted with 25 men and 6 guns) out of Philadelphia. Allegedly part of his mission included carrying secret letters to the Caribbean to Admiral De Grasse, the commander of the French navy (who had been so instrumental in the American victory at Yorktown). In his 1833 application for a Revolutionary War pension Dean gave an account of this voyage. While at harbor on the island of St. Kitts the “Nimrod” was engaged by the British. Dean was wounded, captured, taken to Antigua and imprisoned for the better part of a month. Ultimately he was released, re-joined his crew and the “Nimrod” sailed back to America.*

By now one would think that Dean was ready to settle down, but tragedy struck. Pieterje died in 1783 as a result of childbirth. His great great grandson (who wrote Dean’s biography in the 1940s) thinks the death of his wife was the catalyst for the next chapter of Dean’s life.

In 1784 Dean was seized with the idea of sailing to China!

The first American ship to reach China was the “Empress of China”. It set sail in late 1784 and returned in April 1785. Dean found a group of Albany and New York City investors, and built and fitted out the “Experiment”, after conversations with Captain Greene of the “Empress”. The “Experiment” was relatively small – 80 tons and a crew of about 15. It sailed in December 1785 with a cargo of turpentine, furs, scotch, “Spanish milled dollars”, Madeira, and ginseng. The “Experiment” followed the route of the “Empress” on its 13,000 mile journey, around the Cape of Good Hope in Africa and through the Java and China Seas. It made its way past Macao and up the Pearl River to Canton, landing in June 1786. The “Experiment” was the second American ship to reach China, and greeted by crews from England, Spain, Holland, Portugal, Sweden, Demark and France. (Canton was the only place where foreigners were permitted to engage in trade with the Chinese.)

Dean returned to New York City harbor in April 1787, 18 months after he first set sail, with all members of the crew – a remarkable achievement. While great glory had gone to the “Empress of China”, the fact that a small ship with a small crew could make a successful journey proved the viability of Chinese trade. Her return trip was made in four months and twelve days, with a cargo consisting principally of teas and nankeen cotton (a pale yellow cotton, made in Nanking, China). Dean was said to have brought back lengths of silk for the family and 13 sets of china for Albany families that could afford such luxury. When the “Experiment” sailed up the Hudson to Albany, it was greeted by almost all of Albany’s then population of about 3,000.

Upon his return Dean married Margaret Todd Whetten, sister of one of the “Experiment” crew, in 1787. He continued to sail to China, sometimes for John Jacob Astor (Dean’s uncle by marriage) as captain of Astor’s “Severn”. (Astor began his career as trading fur in Albany in the 1780s after the Revolution, and was soon trading across the Atlantic. He would come to dominate American trade in China and became one of the richest men in the country.) The initial voyage of the “Severn” began in April 1800. It was the culmination of several years of planning, since its route around Cape Horn in South America was unfamiliar and potentially more dangerous, but theoretically shorter than the route around Africa. The gamble paid off. The “Severn” returned in little more than a year, laden with cargo that would make Astor even richer. (Other voyages of the “Severn” were captained by Dean’s brother-in-law John Whetten.)

It’s been said that while on his trips to Canton Dean became good friends with Howqua, the chief merchant for the Chinese imperial Court at Canton (and at one point estimated to be the richest man in the world). Dean was presented with a portrait of Howqua and other captains were entrusted with caskets of special tea to bring to Dean even after he stopped sailing. There’s a family tale that Dean once brought his young son Abraham on a voyage. In Canton, Howqua walked into the Imperial walled court city with the boy. When they emerged Abraham was dressed in the traditional cheongsam of the ruling Mandarin class of the Qing Dynasty. There was even said to have been a painting of an American man and a boy hanging in the Howqua family royal apartments long after Howqua’s death.

By 1805 it appears that Dean’s sailing days were over and he becomes a member of the Albany Common Council, still living on the edge of the Albany River basin next to Abraham Eights, along with their warehouses. By 1809 Dean had become one of the wealthiest men in city and moved to Arbor Hill (then mostly rural), but by 1820 he appears living back on North Market (Broadway) close to the River. For a while the Deans removed from Albany to live with a son in Lima, NY, just south of Rochester, but after the death of his wife Dean went to live in NYC with his daughter Margaret Sedgewick and her family. He died there in 1836.

In 1826 Dock Street would re-named to Dean Street in his honor. Dean St. ran south of and parallel to Broadway, just above the River, and once extended from about Steuben St. on the north to Hudson Ave. on the south. Today a little stub remains that extends from Maiden Lane, running behind the Federal Courthouse and the old Federal Building, opening into the SUNY plaza. 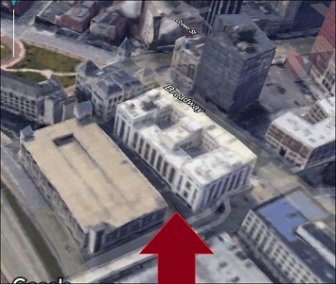 *The story of Dean’s adventure in the Caribbean was adapted by Catherine Maria Sedgewick in a “Tale of Perdita” from her book “Modern Chivalry”. Sedgewick was a cousin of Margaret’s husband, one of the first female American novelists and the most prolific (she’s sometimes called America’s Jane Austen). She started writing around 1820 and continued for the next 40 years. At one point she was engaged to be married to Albany’s own Harmanus Bleecker, but changed her mind and remained single to be able to write.